On Monday, the US President claimed, during a press conference with Pakistan Prime Minister Imran Khan, that Prime Minister Narendra Modi had asked him to mediate on the Kashmir issue. 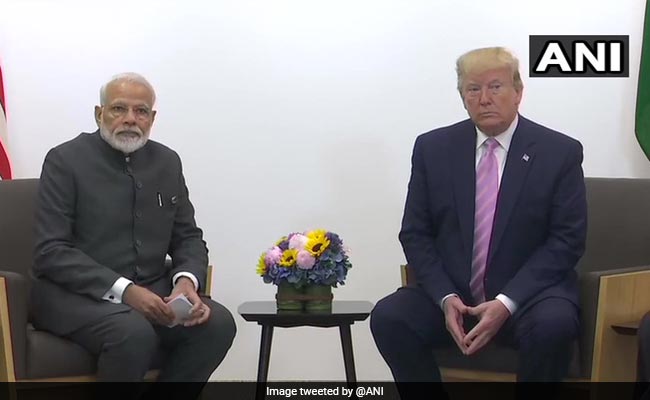 External Affairs Ministry spokesperson said that India-US relationship was an extremely important one.

Preferring to look at the larger picture of Indo-US ties and ignore President Donald Trump's recent remarks on Kashmir, India said on Thursday that it has made its position known on the issue and the US State Department too had issued a clarification, and now it is "time to move on".

External Affairs Ministry spokesperson Raveesh Kumar said that the India-US relationship was an extremely important one.

"It is an extremely important relationship. Our position on the matter has been explained by the External Affairs Minister in both houses of parliament, and by the MEA too. The State Department has made a clarification that their position on this matter remains the same, and there is no change," he said to questions on Trump's statement that had created a flutter.

On Monday, the US President claimed, during a press conference with Pakistan Prime Minister Imran Khan, that Prime Minister Narendra Modi had asked him to mediate on the Kashmir issue. The MEA immediately issued a statement rejecting Trump's claim, saying PM Modi had made no such request and that "it has been India's consistent position that all outstanding issues with Pakistan are discussed only bilaterally."

US Acting Assistant Secretary Alice Wells had also clarified that the US administration welcomes India and Pakistan sitting down to resolve the "bilateral" issue and the "US stands ready to assist".

With PM Modi and US President Trump set to meet in France during the G7 summit, the spokesperson said that both sides prefer to look at the larger picture of the relationship.

"We are very strong strategic partners, and we have brought in deep convergences across a range of issues. We have excellent trade and investment linkages, in the area of defence cooperation; in high defence technology tie-ups. So there are plenty of things on the table," he said.

Asked to react to US President Trump's statement of "bombs going off in Kashmir" and not saying anything to Imran Khan about Pakistan sponsoring terrorism, the spokesperson said that "India's relationship with the US remains multi-faceted and it stands on its own merit".

"The press statement issued by the State Department following the US Secretary of State's meeting with Imran Khan, in each and every statement there is reference to counter terrorism."

He said that terrorism and counter-terrorism found mention during Pakistan PM Khan's US visit.

"Several times the issue of terrorism and counter terrorism came up. We really hope that Pakistan fulfils all the promises it has made in the meetings, and the Pakistani leadership has made in the media interviews on eliminating the infrastructure of terrorism in the areas under their control, in an irreversible and credible manner. We hope they stand up to what they have said," he said.

Asked about Trump's Chief Economic Advisor Larry Kudlow stating that the President "does not make things up", Mr Kumar said he does not want to comment "on each and every position that is coming out on this matter".