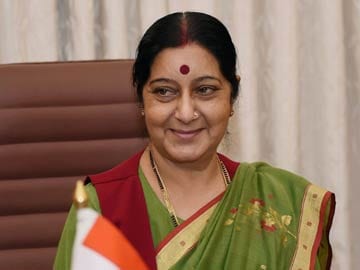 Hanoi, Vietnam: External Affairs Minister Sushma Swaraj said on Sunday that the time has come for India to adopt an "Act East Policy" as she began her three-day visit to Vietnam during which she will hold talks with the top leadership of the Communist nation.

"Now it is time to not just look but act. Under the (Narendra) Modi government, we will have an Act East Policy," the Minister said addressing a gathering of the Indian community in Hanoi soon after her arrival.

Mrs Swaraj will hold bilateral meetings with her Vietnamese counterpart Pham Binh Minh today, besides calling on President Truong Tan Sang and Prime Minister Nguyen Tan Dung. She said that she will discuss a number of issues during her interaction.

The External Affairs Minister said that Vietnam is an important partner and expressed her satisfaction with the bilateral cooperation in security and defence.

Talking about the Lok Sabha elections, the minister emphasised that the BJP has been given a clear majority after 30 years.

"When we first talked about target 270 plus, people made fun of us. But people gave us 282 seats and with alliance we are more than 300," she said adding that the 2014 election was one of "hope".

"And hence people have lot of expectations from this government and we will not discourage them. We will live up to their dreams," she said amid rousing applause.

She spoke about the three months in government and said that it had implemented steps to rid the feeling of "dejection" that had crept in over the last three years.

Mrs Swaraj's visit comes just days after Vietnam renewed India's lease of two oil blocks in the South China Sea for another year, a move that could rile China.

It also comes ahead of next month's visit by President Pranab Mukherjee.

Promoted
Listen to the latest songs, only on JioSaavn.com
During her visit, Mrs Swaraj will also chair a meeting of the heads of Indian Missions in the region besides inaugurating the 3rd Roundtable of the ASEAN-India Network of Think Tanks.