Three killed in Naxal attack on police van in Jharkhand 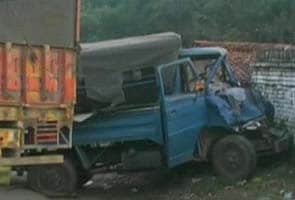 Giridih: Naxals attacked a prison van and killed three people, including two policemen and an undertrial in Jharkhand's Giridih district today. 32 prisoners, who were being transported, are missing. Several Naxal leaders were also in among these prisoners.

The prison van was returning from the local court to Giridih jail when it was attacked.