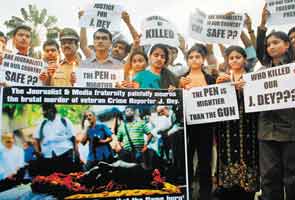 Mumbai: Jyotirmoy Dey was the third journalist in India to be killed in the past six months, a media watchdog said on Tuesday.

There have also been 14 attacks on the Indian media in the same period. In all the cases, investigations are under way but no arrest has been made, said Geeta Seshu of the Free Speech Hub (FSH) of The Hoot.

Dey, a Mid-Day reporter who used to write on the Mumbai underworld, was shot dead June 11 by four motorcycle borne men.

The general secretary of the Bilaspur Press Club, Pathak's case was later handed over to the Central Bureau of Investigation by Chief Minister Raman Singh following pressure by media groups and the opposition.

On Jan 23, reporter Umesh Rajput of Nai Duniya was shot dead by two masked assailants on a motorcycle. A threatening note was found near the scene of the crime.

It said: "Khabar chaapna band nahi karoge toh mare jaoge" (If you don't stop publishing news, you will be killed)."

The Free Speech Tracker, set up last year by FSH to monitor instances of violations of the freedom of speech and expression, says attacks on journalists and intimidation of editors and writers continue unabated.

Seshu observed: "The impunity with which these attacks have taken place only shows that, in India, freedom of speech and expression cannot be taken for granted."

FSH has listed 14 instances of attacks on journalists.

On Jan 3, Sudhir Dhawale, a Dalit activist and editor of Marathi magazine Vidrohi, was arrested and charged with sedition and links with Maoists in Maharashtra.

The same month, Somanath Sahu, reporter of Dharitri, was prevented from attending a press conference at the office of the Deputy Commissioner of Police in Bhubaneshwar and threatened with dire consequences for writing reports that went against the police.

In February, Rajat Ranjan Das, a reporter of Sambad in Orissa, sustained fractures and head injuries at the hands of alleged supporters of Saikh Babu, a ruling Biju Janata Dal (BJD) leader from the town.

That month, MBC-TV reporter Kiran Kanungo and cameraperson Prasant Jena were manhandled by some BJD workers in Banki.

Again the same month, an OTV reporter N.M. Baisakh and his cameraman Anup Ray were assaulted in Paradeep when they were covering a protest by locals demanding jobs and compensation.

On May 8, in Itanagar, some people alleged to be supporters of Arunachal Pradesh Congress chief Nabam Tuki, who is a minister, attacked several media offices ostensibly to protest a report in a leading daily involving their leader.

Promoted
Listen to the latest songs, only on JioSaavn.com
In May, three journalists were beaten up allegedly by Communist Party of India-Marxist (CPI-M) supporters in Burdwan district of West Bengal.

On May 21, unidentified assailants waylaid V.B. Unnithan, a Kollam-based senior reporter of Mathrubhumi (Kerala), and assaulted him with iron rods when he was going home.