The Odisha government allowed the people to congregate at the temple after the decline in the prevailing pandemic. 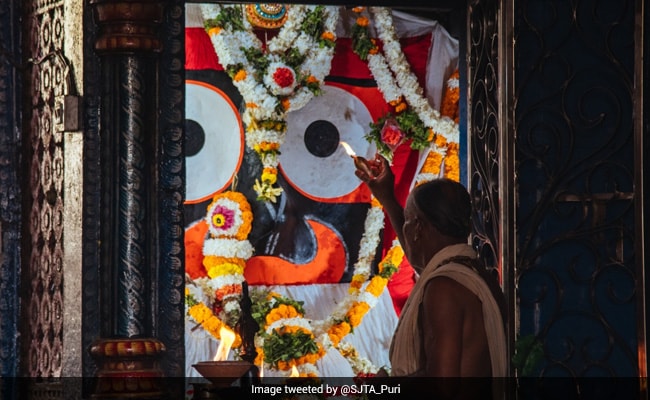 As per tradition the deities remained in the 'Anasar Gruha' (the sick room) inside the temple.

Thousands of devotees on Wednesday thronged the 12th century 'Sri Mandir' in Puri in Odisha to witness the 'Nabajaubana' (The Holy Sight of Juvenile Youth) of Lord Jagannath, Lord Balabhadra and Devi Subhadra after a gap of two years due to the pandemic.

The state government allowed the people to congregate at the temple after the decline in the prevailing pandemic.

As per the tradition the deities remained in the 'Anasar Gruha' (the sick room) inside the temple after their ritual bath on 'Snan Purnima' day. It is believed that the the Holy Trinity appears in youthful form on this day after recovering from fever induced by the bath.

The devotees were allowed entry into the temple through the Singhadwar (The Lion Gate or the East gate ) and exit from the Hastidwara (the elephant gate on the north).

Meanwhile, the 'Bishwakarma' (the chariot makers), painters and tailors are giving the final touch to the three gigantic chariots of the deities parked in front of the temple before the annual Ratha Jatra on July 1.