Those Who Don't Innovate Will Stagnate: PM Modi To IIT Bombay Students 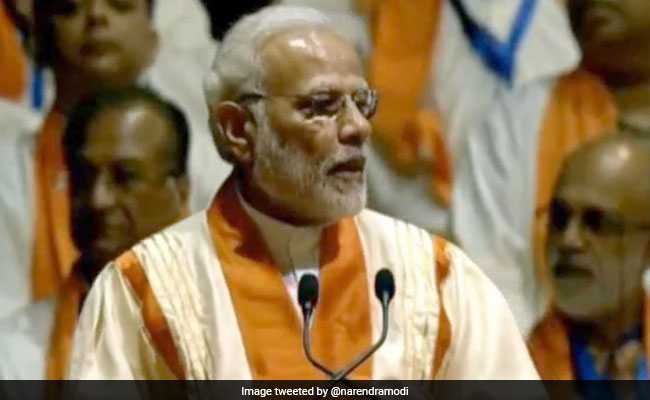 Prime Minister Narendra Modi said innovation was the buzzword of the 21st century.

Prime Minister Narendra Modi today said a society will stagnate without innovation and called for collective efforts to improve the quality of higher education.

The IITs have built brand India globally and now, become an "instrument for transformation". Innovation and enterprise are the foundation of making India a developed nation, Modi said addressing the 56th annual convocation of the Indian Institute of Technology-Bombay (IIT-B).

The prime minister said, "Any society that does not innovate, stagnates. Make India the most attractive destination for innovation. Innovate in India and innovate for humanity." "It is not just the government efforts. New ideas come from young minds at campuses and not government buildings and fancy offices," he said, adding that innovation was the buzzword of the 21st century.

Seven lakh engineering students pass out every year, and a collective effort is required to ensure they get high quality of education and acquire necessary skills, PM Modi said.

Dwelling on the history of IITs, PM Modi said they were conceptualised to contribute to nation-building post-Independence through the use of technology.

He said all the IITs have built brand India globally and their students are at the forefront of some of the best startups in India. IIT students are helping in solving national problems. The biggest corporations of today were startups of yesterday, PM Modi said.

"The nation is proud of IITs and what IIT graduates have achieved. The success of IITs led to the creation of engineering colleges around the country. They were inspired by the IITs and this led to India becoming one of the world's largest pools of technical manpower," he said.

"Innovation and new technology will decide the trajectory of world growth and our IITs are working for new India's, new technology, the prime minister said.

IITs represent diversity of India where students from different parts of the country and background merge in pursuit of knowledge and learning, the prime minister said.

India is improving its innovation ranking, PM Modi said, highlighting his government's initiatives in this regard. "The Atal Innovation Mission and Start Up India have resulted in India having the second largest ecosystem in the world (for entrepreneurship promotion).

India has become a hub for start-ups. "In the innovation index, we are going up. We must make India an attractive destination for innovation," he said.

In the beginning of his 35-minute speech, the prime minister paid tributes to freedom fighter Khudiram Bose, who sacrificed his life for the nation 110 years ago when he was just 18. "We did not have the good fortune to die for our country. But, we can live for independent India and work for creating a new India," he said.

He urged the graduating students to focus on aspirations and keep their goals high. "If you face self-doubts that will restrict your talent," he further said.

PM Modi suggested the IIT-B, which is celebrating its diamond jubilee, to launch an outreach programme for students around Mumbai, which has around 800 colleges with 9.5 lakh students.

"You are fortunate to have lived in a campus in Mumbai where there is a lake on one side and hills on the other. Sometimes you have the company of crocodiles and leopards. It's still August, but the mood is indigo," Prime Minister Modi said, referring to IIT-B's annual college cultural festival "Mood Indigo", which is generally organised in December.

(Except for the headline, this story has not been edited by NDTV staff and is published from a syndicated feed.)
Comments
Prime Minister Narendra Modiaddresses IIT Bombay student