"Those Who Do Politics Of Religion...": Tej Pratap Yadav's Cryptic Tweet

Whether Tej Pratap Yadav targeted his critics or those who indulge in divisive politics based on religion through his tweet only he can tell, but tweeple had a ball looking at the image he shared with the tweet 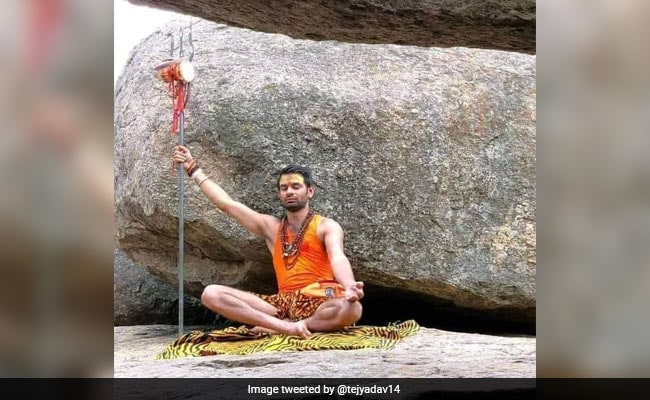 Tej Pratap Yadav, who loves to play dress-up, is seen in Lord Shiva's costume in the photograph.

Former Bihar minister and the eldest of Lalu Yadav's children Tej Pratap Yadav may not be a sharp politician like his brother Tejashwi Yadav, but the religious-minded multitasker manages to stay in news. From his brash statements, temple visits to dressing up as gods and his acting projects, there is never a dull moment in Tej Pratap's life.

Trolls go into hyperdrive when they see him dressed as Lord Shiva or Lord Krishna or when his tweets have words such as "vaastu", "ghosts" and "Ayodhya".

In his latest tweet, the rudraksh-wearing son of Rabri Devi says he is religious, but clarifies that he is secular and not a fanatic. "My religion teaches me compassion, not hatred. Everybody is equal for me. Those who do politics of religion won't understand," he wrote.

Whether he targeted his critics or those who indulge in divisive politics based on religion through his tweet only he can tell, but tweeple had a ball looking at the image he shared with the tweet.

In the photograph, he is seen meditating on a rock dressed as Lord Shiva -- a saffron vest, animal print drape, layers of rudraksh around his neck, sandalwood on his forehead and a conch attached to a trident are all in place.

This isn't the first time when he has donned the Shiva look. He was recently seen in the costume at a temple in Patna.

Earlier, a day before his well-attended wedding, posters starring Tej Pratap as Lord Shiva and his then-fiancee Aishwarya Roy as Parvati had come up outside the Yadavs' residence at 10, Circular Road.

During a visit to Mathura, 29-year-old Tej Pratap posed for the camera dressed as Lord Krishna and played the flute.

Even his analogies come wrapped in mythology. When rumours of a rift between the brothers over Tejashwi's rise in the RJD and the perceived sidelining of Tej Pratap did the rounds, Tej Pratap expressed his anguish and frustration saying he was ready to hand over the reins of 'Hastinapur' to 'Arjun' and move to 'Dwarka'.

He even crowned his brother at a mega event to mark the foundation day of the party their father had launched over two decades ago.

Tej Pratap Yadav is also known for his superstitious beliefs. Claiming that "Bihar Chief Minister Nitish Kumar and his deputy Sushil Modi had unleashed ghosts", he had vacated the government bungalow in Patna that was allocated to him when he was a minister.

A 'dushman maaran jaap' (chant of hymns to eliminate enemies) was reportedly organised at his bungalow when the central agencies were probing corruption charges against his family.

Tej Pratap was health minister of Bihar before Chief Minister Nitish Kumar dumped the RJD and revived his alliance with the BJP in July last year.

Next he will be seen in upcoming movie "Rudra - The Avtar", which will mark his debut into Hindi films after a Bhojpuri film. The poster shows Tej Pratap in a pair of aviators and is captioned: "Coming soon".