Tej Pratap, 29, tweeted a teaser poster of his upcoming movie "Rudra - The Avtar". 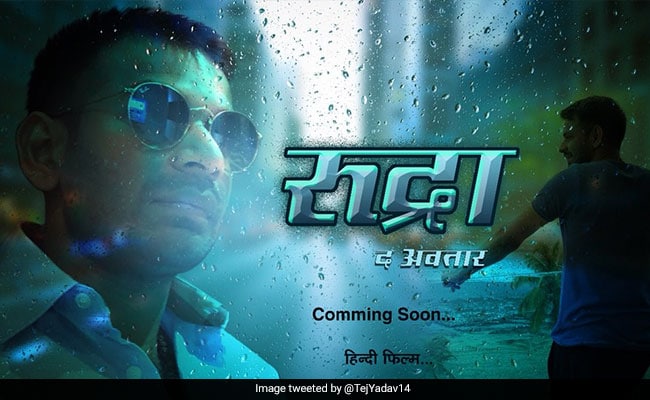 The poster shows Tej Pratap in a pair of aviators and is captioned: "Coming soon".

Tej Pratap Yadav, the older son of Bihar politician Lalu Yadav, may be resigned to playing second fiddle to his younger brother Tejashwi in politics, but in movies, he need not share the spotlight.

This morning, Tej Pratap, 29, tweeted a teaser poster of his upcoming movie "Rudra - The Avtar". The movie marks Tej Pratap's debut into Hindi films after a Bhojpuri film.

The poster shows Tej Pratap in a pair of aviators and is captioned: "Coming soon".

Tej Pratap was health minister of Bihar when he first appeared on the silver screen. In the 2016 film, he starred as chief minister - a role his critics believe he has very little chance of scooping in real life if pitted against his more politically savvy brother.

The last time Tej Pratap was seen in posters was last month, when he married Aishwarya Roy, the daughter of a veteran leader of his party Rashtriya Janata Dal.

Tej Pratap, known to visit temples and even depicted as "Lord Krishna" by his fan club, is not articulate and a media favourite like Tejashwi Yadav.

Tejashwi, who was deputy chief minister until Nitish Kumar dumped the RJD last year and revived his ties with the BJP, took charge as leader of opposition after father Lalu Yadav was sent to jail for corruption. Yadav junior is seen to have shown immense promise in leading the party recent by-polls.

Unlike Tej Pratap, Tejashwi is considered to be the political heir to Lalu Yadav, a two-time chief minister.