Muzaffarpur: They came to take an exam. They were asked to take off their clothes first.

Hundreds of young men seeking jobs in the army wrote an exam in their underwear in Bihar's Muzaffarpur.

Reacting to the bizarre images splashed across the media, the defence ministry has asked Army Chief General Dalbir Singh Suhaag to explain.

On Sunday, some 1,100 candidates were horrified as they reached the examination centre and were instructed to strip.

"The vest too," the examiners said when the job-seekers took off their shirts and trousers.

Harishambhu Kumar, 21, who appeared for the exam for the first time, said: "We were frisked and then ushered into an enclosure. Then the army officers asked us to remove all clothes except our underwear. I felt awkward, but the army people told us it was to check cheating, so I got used to it."

In a state notorious for cheating - brazen and often aided by examiners and parents - the army officials decided that it was the best way to eliminate the possibility of scraps of paper hidden in clothes.

Colonel VS Godhara of the Army Regional Office said: "I am entitled to take all precautions necessary. In the past year, there have been two instances of candidates hiding cheating slips and mobile phones in their vests and undergarments."

The candidates finally sat cross-legged on the ground in their briefs and used their thighs as tables for the one-hour test. Some complained they were cold and uncomfortable, but they had no choice.

Colonel Godhara shrugged: "In the physical test, they would anyway run and do physical activities in their underwear."

The government is considering computerizing the test to eliminate cheating or copying.

Last year, images of mass cheating involving Class 10 students made international headlines. Parents, relatives and others were seen scaling the walls of the exam centre to pass scraps of papers to students, unrestricted. 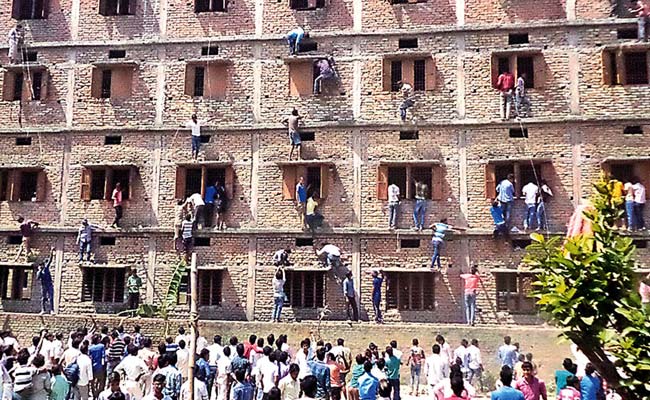 In January, ahead of the board exams, Bihar announced a Rs. 20,000 fine for students caught cheating and jail for relatives caught helping them. The state has also ordered CCTV cameras in classrooms, and a live stream of some exam centres.