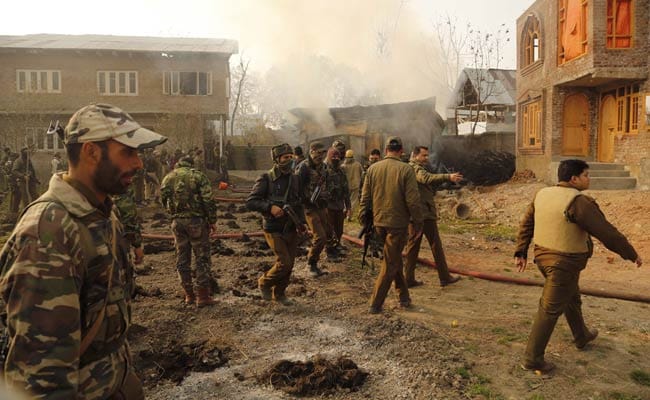 Policemen inspect the site of a gunbattle on the outskirts of Srinagar, on Friday. (Associated Press)

Srinagar: In a series of terror attacks in Kashmir, large parts of which will vote on Tuesday in a staggered election, 13 people were killed today. In addition to a civilian, nine soldiers and three policemen were killed, marking the heaviest losses for security forces in the state in over six years.

Kashmir has in recent days held two of five phases of voting, with a record number of people participating in the election, defying a boycott called by separatists.

Today's attacks - the gravest was on an Army camp in the border town of Uri - were condemned by Prime Minister Narendra Modi as "desperate attempts to derail the atmosphere of hope and goodwill as seen by increased voter turnout."

One of the attacks was at Srinagar, where the PM is due to campaign on Monday. Two terrorists were killed after they opened fire on a police post in the heart of the city.

In Uri, just 100 km away, an artillery camp was the target of a massive suicide attack early this morning. Nine soldiers, including an officer, and three policemen were killed. Six terrorists were shot dead. Sources say food packets and other items recovered from the terrorists had stamps of Pakistan. Six assault rifles and more than 50 magazines were found on the attackers. They had ten grenades each.

Army sources also say the staging camp used for the terrorists is in Pakistan, just a few kilometres from the Line of Control or LoC.

"I think Pakistan should try to stop these incidents, if they can't they should speak to India about it," said Union Home Minister Rajnath Singh. Army Chief Dalbir Singh Suhag will visit Srinagar on Saturday.

Two people were killed in grenade attacks in Tral and Shopian in South Kashmir.

Promoted
Listen to the latest songs, only on JioSaavn.com
The result of the state election will be announced on December 23. Led by an expansive campaign by the Prime Minister, the BJP is making its most serious bid yet for the state, banking on votes in the Hindu-majority Jammu and Buddhist Ladakh areas. It is also capitalising on the rise of independents and splits elsewhere in Muslim-majority Kashmir.