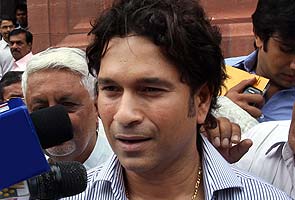 New Delhi: For a change, the master became a pupil.

Sachin Tendulkar, who attended the Rajya Sabha for the first time on the opening day of the Monsoon session today, got some lessons from President Pranab Mukherjee on the functioning of Parliament.

The batting maestro, accompanied by noted film actress Rekha, called on the President at Rashtrapati Bhavan during which the first citizen briefed them about Parliamentary procedures, Press Secretary Venu Rajamony said after the meeting.

During the meeting, the President, a veteran Parliamentarian, described some salient features of the Indian Constitution and history of India's Independence, he said.

Sachin Tendulkar, who has scored 100 centuries in test cricket and one day internationals, described the interaction as "highly enjoyable and educative" and Rekha termed it as a "blessing".

Sachin Tendulkar and Rekha were nominated as Rajya Sabha members on April 26. The 39-year-old cricketer had taken oath on June 4 in Chairman Hamid Ansari's chamber when Parliament was not in session.

"It is a new experience for me," Sachin Tendulkar told reporters after his maiden presence in the Rajya Sabha.

57-year-old Rekha was another head-turner as she entered the House glamorously clad in a cream coloured saree with golden patterns and pink border. Both received warm greetings from of members.

Sachin Tendulkar and Rekha attended the Question Hour which was adjourned after obituary references because of uproar over Assam violence and alleged desecration of B R Ambedkar's statues in Uttar Pradesh.

Promoted
Listen to the latest songs, only on JioSaavn.com
Later, they attended the Zero Hour which was also adjourned after a few minutes over the same issue.