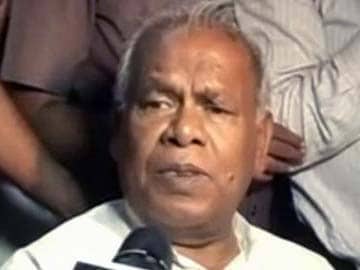 This act is not a class bias, it is caste bias, Bihar Chief Minister Jitan Ram Manjhi said.

Patna: A temple in Bihar was apparently cleaned and the idol washed after Bihar Chief Minister Jitan Ram Manjhi paid a visit there.

The temple is located in Madhubani district's Parmeswaristan, 160 km from the state capital Patna.

"I was invited there by the people. But after leaving I was told that the idols in the temple were washed," said Mr Manjhi, who belongs to the Mahadalit or the most backward castes.

"I don't blame them (the people) for this act, because their values are these, not ours. Now I want to complain about this act as it is not a class bias, it is caste bias," he added.

The man who tipped him off about the clean-up act was Ramlakhan Ram Raman, a senior cabinet minister, the Chief Minister said.

Promoted
Listen to the latest songs, only on JioSaavn.com
But Mr Raman, who belongs to the Dalit community, has denied telling the Chief Minister any such thing. "This is not in my knowledge," he categorically told NDTV.

Mr Manjhi was handpicked by JD(U) chief Nitish Kumar as his successor in the top job when he stepped down after the assembly poll debacle this May. As a member of one of the most backward castes, Mr Manjhi has committed himself to the welfare and uplift of Mahadalits.
Comments
Caste biasJitan Ram Manjhi

Minimum Temperatures Below Normal In Most Parts Of North India