This was K Chandrashekar Rao's first meeting with PM Narendra Modi after the former won the assembly elections to return to power in Telangana. 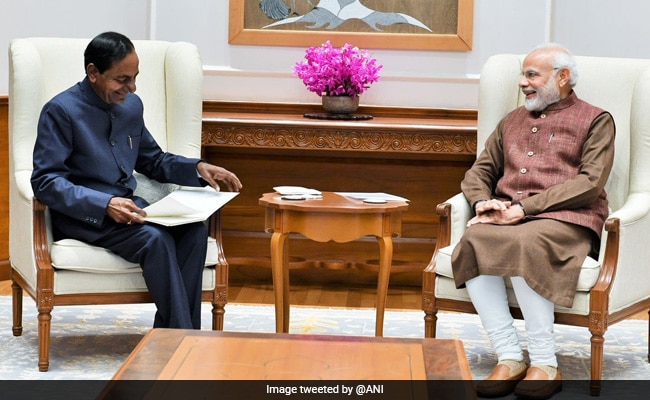 This was Mr Rao's first meeting with PM Modi after the former won the assembly elections to return to power in Telangana.

He discussed a variety of issues with the prime minister, including release of funds for 10 backward districts, setting up of a separate high court for Telangana, Kendriya Vidyalayas in new district and an IIIT in Karimnagar district.

His meeting with PM Modi came days after he met his Odisha counterpart Naveen Patnaik on Sunday and West Bengal Chief Minister Mamata Banerjee on Monday.

The TRS chief, who is in Delhi since Monday night, also plans to meet Bahujan Samaj Party (BSP) chief Mayawati.

Samajwadi Party (SP) leader Akhilesh Yadav has said that he would visit Hyderabad in the coming days to meet Mr Rao.

He said he would meet Mr Rao after January 6 in Hyderabad as he could not be in Delhi on December 25 and 26 as planned earlier.

Earlier, the TRS chief had planned to meet Akhilesh Yadav in Delhi at the residence of SP patriarch Mulayam Singh Yadav.