Need A Meal, Bath Or Shave In Telangana? Just Contact A Local Candidate

TRS candidate from Mahbubnagar, Srinivas Goud, has become a one-stop shop for virtually any service under the sky.

Some candidates in Telangana were seen giving a bath to children and even adults.

If you are a voter in Telangana and need a haircut, a shave, a meal or even someone to take care of your child, don't be surprised if your local candidate decides to help you out. In the last few days, several photographs and videos have gone viral in the election-bound state, showing candidates performing all kinds of tasks to endear themselves to voters.

Take Telangana Rashtra Samithi (TRS) candidate from Sangareddy, Chinta Prabhakar, for instance. He was seen sitting cross-legged, cooking a snack for people. He could also be seen reassuringly hugging an elderly woman and listening to her old-age and pension woes.

Election season is also the time haircuts and shaves come for free. A few professional barbers had publicly announced that they would do haircuts for free on behalf of Harish Rao, the TRS candidate from Siddipet.

But some candidates decided to bypass the barbers and wield the scissors and blade themselves.

Madhusudana Chary, till recently Speaker in the Telangana assembly, was seen soaping up voters for a shave. It's another matter that he his on a razor's edge in what could turn out to be a close fight in the Bhupalapally constituency.

A few candidates were seen giving a bath to children and even adults, while a few others carried toddlers around as a prop for campaigning. 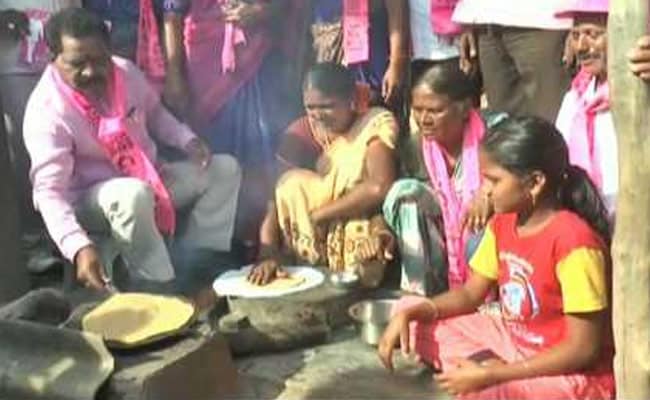 TRS candidate from Mahbubnagar, Srinivas Goud, has become a one-stop shop for virtually any service under the sky, be it construction work, ironing your clothes, fetching water or cleaning rice.

Spinning a yarn usually comes easy to politicians but sitting on the loom is not quite the same thing. Some aspiring lawmakers were seen keenly pulling a few strings in weavers' settlements, hoping to pull at heartstrings and also posing for the camera.

Though most photos and videos that went viral seem to belong to the ruling TRS, Congress candidate from Musheerabad Anil Kumar Yadav isn't far behind. He was seen ironing clothes and even making a dosa or two on the roadside.

But voters may be able to avail of these services only till December 5 when campaigning ends in the state. All the 119 seats in Telangana will vote on December 7. The results will be declared with the other poll-bound states Chhattisgarh, Madhya Pradesh, Mizoram and Rajasthan on December 11.