"Many big things have happened in the thick of night. Independence was achieved and the Union Jack was lowered at midnight," Sushil Modi had said in reference to Maharashtra. 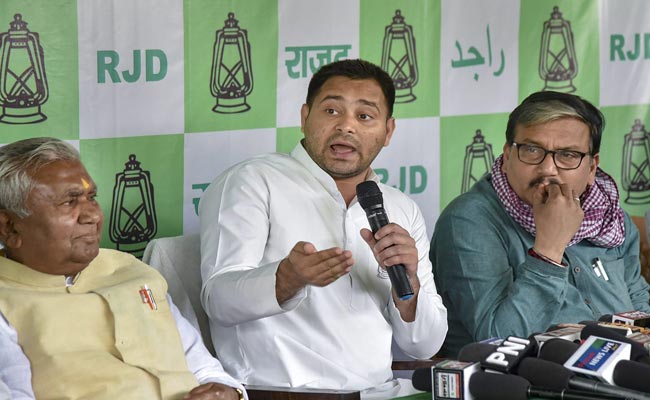 Tejashwi Yadav drew a parallel between government formation in Maharashtra and Bihar. (File)

Rashtriya Janata Dal (RJD) leader Tejashwi Yadav took a jibe at Bihar Deputy Chief Minister Sushil Kumar Modi on Monday, reminding of the "khela" (play) enacted in Bihar a couple of years ago in the that helped the BJP achieve power despite having lost the mandate.

Mr Yadav added that had his party joined hands with the BJP, Sushil Modi would have still been the deputy but serving under "a Chief Minister of our party."

The RJD leader rose from his seat in the state assembly, speaking in support of other opposition MLAs were raising slogans against police clamp down on a Congress procession by

As Mr Yadav began speaking about alleged attempts by the Nitish Kumar government to "muzzle the oppositions voice", he turned towards Sushil Modi and said, "Modi-ji says many fine things happen in the night. Bihar too has seen such a khela, when a government was formed in the thick of the night".

Mr Yadav was referring to a tweet by Mr Modi in which he had defended his party against criticism from the opposition over the developments in Maharashtra.

"Many big things have happened in the thick of night. Independence was achieved and the Union Jack was lowered at midnight," Mr Modi had tweeted in Hindi.

Mr Yadav's insinuation was about the developments that took place in Bihar in July, 2017 when Nitish Kumar resigned, disapproving of the RJDs refusal to heed demands for his resignation in the backdrop of a money laundering case.

Mr Kumar sprung a surprise less than 24 hours later when he was sworn in as Chief Minister again as he staked claim to form a new government with the support of BJP, paving way for Mr Modi's return as deputy, four years after he was stripped of the post as Mr Kumar snapped ties with the BJP.

Mr Yadav's tongue-in-cheek remark was, however, drowned out in the shouting of slogans by agitated members which prompted Speaker Vijay Kumar Chaudhary to adjourn the proceedings till

Mr Yadav said his party too had the option of tying up with the BJP and retaining power but decided otherwise on account of ideological commitments.

"It seems to have become the BJPs style of functioning. We saw similar things happening in Goa. As the matter is sub judice, I would not like to say much about Maharashtra but wait for the Supreme Courts verdict," he said.

Incidentally, Mr Modi had claimed during the Lok Sabha polls this year that Mr Kumar's exit from the grand alliance had come months after a meeting Lalu Yadav had with the late Union minister Arun Jaitley.