Tejashwi Yadav attacked Nitish Kumar for a scrapped letter sent out by a senior police officer that expressed concerns about lakhs of out-of-work people returning to Bihar getting involved in criminal activities.

Tejashwi Yadav said the migrants' crisis will be a major issue in upcoming Bihar elections.

A hoarding, ordered 24 hours ago, prompted an appearance by Bihar's Leader of Opposition Tejashwi Yadav at the Rashtriya Janata Dal (RJD) party office on Saturday. Mr Yadav himself put up the board, directing pointed questions at Chief Minister Nitish Kumar over a controversial letter issued by a senior police officer on migrant workers.

Although the letter issued on May 29 was withdrawn on June 4, Mr Yadav sensed a chance to reach out to migrants who have been pouring into the state since the nationwide COVID-19 lockdown was eased last month. The letter had expressed concerns about the lakhs of out-of-work people returning to the state getting involved in criminal activities. It had asked local authorities to prepare a plan to handle the situation.

Mr Yadav's hoarding seized the contentious directive, asking Nitish Kumar why his administration thought the migrant workers were "goondas" and why they were called "looteras". 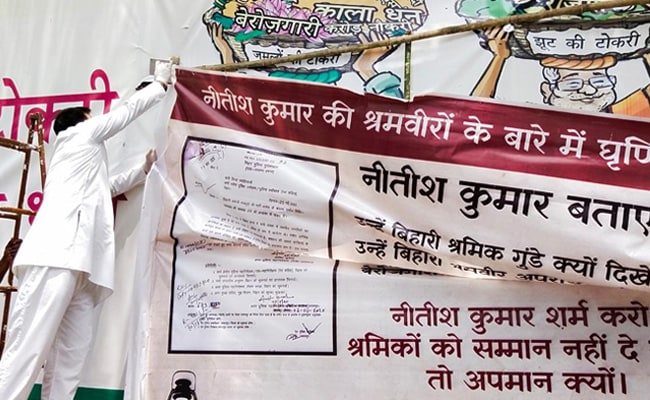 Tejashwi Yadav himself put up the hoarding at the RJD office in Patna.

Referring to a point in the letter that said the Bihar government was unable to provide jobs to 10 lakh migrants and it could create a major law and order problem, Mr Yadav also demanded to know why employment rights were denied to the migrants.

Mr Yadav said that the Nitish Kumar government's "step-motherly" treatment of migrant labourers will be major issue in state elections due later this year.

While the RJD appeared determined to use the crisis to embarrass Nitish Kumar and the National Democratic Alliance (NDA), Janata Dal United spokesperson Sanjay Singh brushed off the attack, saying Tejashwi Yadav was "trying to make a mountain out of a mole hill" and accused him of creating a "tamasha" even though the letter was spiked.

Nitish Kumar's ally Lok Janshakti Party, however, said that employment for migrants, who have returned to Bihar from across the country, should be the top priority for the ruling NDA as it prepares for the state assembly polls.

Hinting at some degree of discord on the migrants' crisis, LJP president Chirag Paswan said he never doubted Mr Kumar's intentions but there have been "shortcomings" which he as an honest ally has highlighted.