Tej Pratap said that he was committed to helping his brother, Tejashwi Yadav, become the next Chief Minister of Bihar. 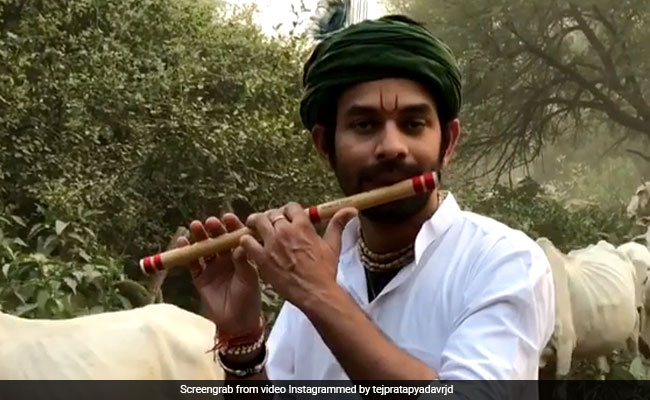 Holding people's court at the RJD state headquarters for the second consecutive day, Lalu Yadav's elder son Tej Pratap Yadav on Tuesday said he would be happy if his younger brother Tejashwi Yadav made an appearance at his Janta Durbar.

The MLA and former minister, who had on Monday said he would not shy away from assuming the leadership of the party if given a chance, however, dismissed queries about a number of party leaders reportedly expressing their discomfort over the prospect of the mercurial leader taking over the party.

"There may be some RSS-minded people in the party who will get a brainwash once they meet me personally. I do not know what they are saying and why. Elections are approaching and many people start speaking unnecessarily out of worry over tickets," Tej Pratap told media.

He also maintained that he was committed to helping his brother, Tejashwi Yadav, become the next Chief Minister of Bihar.

"I had expressed my commitment long back, in full public view, and blown a conch to announce the Mahabharata. I have been time and again saying that it is Tejashwi who is Arjuna and I will be playing the role of Krishna. I will be there to guide him. Some people want to create a rift between brothers," he alleged.

Notably, the two brothers have not been seen together ever since Tej Pratap filed a petition seeking divorce from his wife of six months -- the decision has been met with disapproval from his family.

Tej Pratap Yadav had remained conspicuous by his absence on the first four days of the winter session of the state assembly, which concluded last month, and on the final day when he made an appearance, he avoided crossing paths with Tejashwi Yadav.

When asked whether he would like Tejashwi Yadav to attend the Janta Durbar, Tej Pratap said, "Why not. I would like to say to Tejashwi, if you are watching this telecast please do come and join me in listening to the woes of the people so that we may work towards solving these"

Mr Yadav, who has of late begun to display a much more active interest in politics unlike in the past when he used to devote more time to religious pursuits, was asked whether he had been advised to do so by his father whom he met in Ranchi last week.

He replied in his trademark style. "Why should I tell you what my political guru and I talked about. Do you share in public the conversations you have with your wife," he said.

When pointed out that his earthy mannerisms and acerbic wit had an uncanny similarity to those of his legendary father, Mr Yadav said ,"Who else do you think I would have resembled".

He also remarked Janata Durbar had started with Lalu Yadav. "Nitish chacha (uncle) only tried to imitate that but nobody attending his version has ever been provided with a solution to his or her problems. In contrast, Lalu used to decide matters on the spot. I am trying to carry the legacy forward," he said.