Read inOther Languages
This Article is From Nov 09, 2018

Tej Pratap was last seen in Bodh Gaya on Saturday where he had checked in at a hotel after meeting his ailing father at a hospital in Jharkhand capital Ranchi. 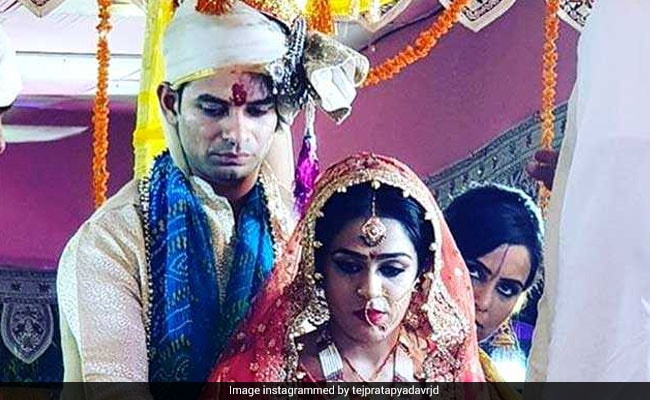 RJD chief Lalu Yadav's son Tej Pratap Yadav on Friday said he was currently putting up in Haridwar and would not return home till his family backed his decision to divorce his wife of six months. Talking to a regional news channel in Patna over phone, he extended his greetings to younger brother Tejashwi Yadav on his birthday, but said he would not be able to join the celebrations in New Delhi, where the RJD heir apparent has gone to meet their sisters.

Tej Pratap was last seen in Bodh Gaya on Saturday where he had checked in at a hotel after meeting his ailing father at a hospital in Jharkhand capital Ranchi.

Lalu Yadav is reportedly upset over his elder son's decision to seek divorce.

He is serving sentences in a number of fodder scam cases. At present, he is lodged at a hospital in Ranchi on medical grounds.

Tej Pratap Yadav and Aishwarya Rai - daughter of RJD Member of Legislative Assembly or MLA Chandrika Rai and grandchild of former Bihar chief minister Daroga Prasad Rai, had tied the knot on May 12.

"Our differences are irreconcilable. I had said this to my parents before the marriage was solemnized. But nobody listened to me then and nobody is listening to me now. Until they agree with me, how can I return home?" Tej Pratap said.

The former Bihar minister also expressed displeasure over the role played by some of his close relatives, including in-laws, in his marital dispute.

In an apparent rebuttal of reports that he has been feeling slighted over the growing clout of his younger brother, Tej Pratap said, "I offer my blessings to Tejashwi. May he become the next chief minister of Bihar. I would be by his side and help him the way Krishna had assisted Arjuna in the battle of Mahabharata".

"Laluji has been not keeping well. The developments have only made matters worse for him and the way things are being highlighted in the media is causing him further anguish," Bhola Yadav, who has been by the side of the RJD chief for most part of his incarceration, said.

He also said that Lalu Yadav's wife Rabri Devi will not be performing 'Chhatth' this year.

"She has decided to stay away from the festivities as she is also not keeping well. But please do not jump to any conclusions upon hearing this," Bhola Yadav told reporters.

Chhath is arguably the most popular festival in Bihar and the Yadav family celebrates the festival fervently every year.