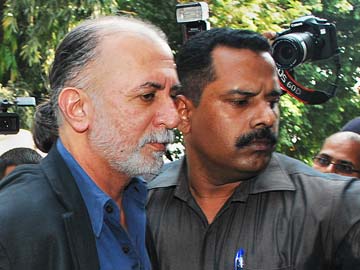 Tarun Tejpal is escorted by police officials from a courthouse after being remanded in police custody in Panaji on December 1, 2013

Panaji: Tarun Tejpal, arrested for rape in Goa, was taken this morning for a sexual potency test, mandatory in cases of sexual assault.

Mr Tejpal, 50, is the founder of investigative news-magazine Tehelka. He was arrested on Saturday for allegedly raping a younger colleague last month at a five-star hotel in Goa during an annual Tehelka conference.

The Goa Police has been given his custody for six days to interrogate him. In court today, his lawyers' arguments are expected to include a request for him to be allowed a fan while in jail, reported the Press Trust of India.

Promoted
Listen to the latest songs, only on JioSaavn.com
He has said he is innocent and that the encounter with the young woman reporter was consensual.

The reporter, who quit Tehelka recently, accusing it of trying to engineer a cover-up to protect Mr Tejpal, has fiercely contested his version of events. She has also alleged that his family has tried to intimidate and harass her after the Goa Police filed its case against Mr Tejpal.