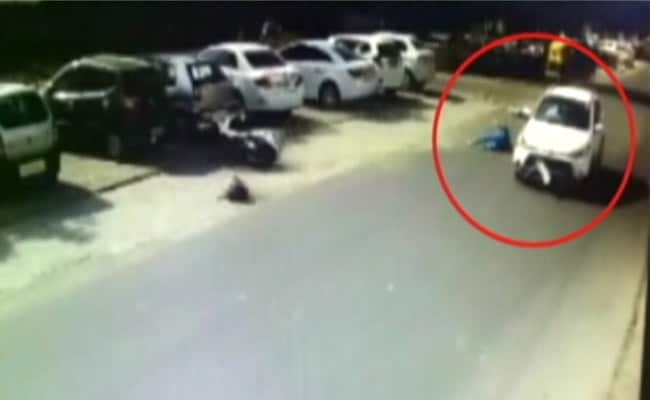 Ahmedabad: Two teenage girls miraculously escaped death when a speeding car hit their two-wheeler in Ahmedabad. The horrific accident was caught on CCTV cameras, but it took the police more than 12 hours to register a case and launch a hunt for the driver of the car.

Engineering students Vekariya and Freni Pala were going towards a multiplex in western Ahmedabad on Tuesday afternoon, when they were hit by a speeding Hyundai i-20.

"It's a miracle. When we saw the footage we were shocked. The car was moving at a high speed in the service lane,'' said Kalpesh Vekariya, father of one of the girls. The two girls are reported be stable now.

The car was owned by a businessman Alok Thakkar. But his relative Jayesh turned up at the Satellite police station, claiming the vehicle was being driven by an employee, Alkesh.

Senior traffic police officer SD Patel said on basis of the CCTV footage, a First Information Report has been lodged and a hunt has been started for the driver of the car.

"We will match the identity of the driver captured on camera with the employee which the owners claim was driving the car. We are looking for him,'' said Mr Patel.