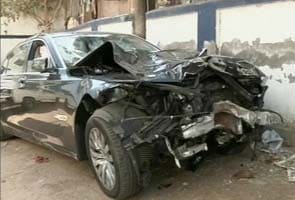 Ahmedabad: A local court in Ahmedabad today rejected the bail plea of Vismay Shah, prime accused in the BMW hit-and-run case in which two people were killed last month.

Additional session judge BL Jadhav rejected the bail application based on reports submitted by RTO and the forensic lab that the BMW car was running at over 135 kmph when it knocked down the two bikers.

"Bail plea of Vismay Shah was rejected by the session court as it upheld reports of Regional Transport Officer (RTO), Forensic Science Laboratory (FSL) and a car dealer that the BMW car was running at over 135 kmph," Special Public Prosecutor in the case Pravin Trivedi said.

The three eyewitnesses in the case were also present at the time of hearing.

27-year-old Vismay Shah was booked by police under section 304 (culpable homicide not amounting to murder) of Indian Penal Code (IPC).

On February 25, Vismay Shah had allegedly rammed his BMW into two persons on a motorcycle in the Judges Bungalow area, flinging them off the two-wheeler.

25-year-old Shivam Dave - who was riding the bike - died on the spot. His friend Rahul Patel, a pillion rider, later succumbed to injuries at a private hospital.

The car had screeched to a halt after dragging the bike for about 35 metres before ramming into a tree, police had stated.

Promoted
Listen to the latest songs, only on JioSaavn.com
Such was the speed of the car that the tree hit by it almost got uprooted. The BMW car carried a Chandigarh registration number.