The Prime Minister cautioned against any complacency during the upcoming festival season, including the festival of lights - Diwali. 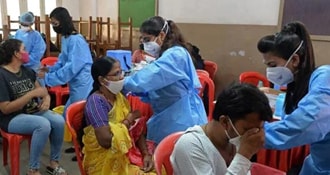 The Prime Minister cautioned against any complacency during the upcoming festival season, including the festival of lights - Diwali.

"But in this festival we have to remember about one more fight - that is the country's fight against Corona. Team India is making new records every day in this fight," said PM Modi.

Earlier in the month, India crossed 2.5 crore Covid vaccinations on September 17 for the first time as the government raced to deliver a record on Prime Minister Narendra Modi's birthday.

The government had set out with a target of 2.5 crore vaccinations and crossed the mark by 10,390.

China inoculated the most number of people in a day - 2.47 crore - in June.

"In vaccination, the country has made many such records which are being discussed all over the world. Every Indian has an important role in this fight. We have to get vaccinated when it is our turn, but also keep in mind that no one is left out of this security cycle," the Prime Minister said in his address today.

PM Modi stressed that even after being vaccinated all protocols - social distancing, masks, hygiene - have to be followed. "I hope that Team India will once again wave its flag in this fight," he said.

Taking a swipe at the government over the record COVID-19 vaccinations in a single day, Congress leader Rahul Gandhi shared a graph from the Co-WIN website showing a decline in inoculations after the record, saying the "event" is over now.

There were reports from Madhya Pradesh that people who did not receive their Covid shots somehow seem to have been issued vaccination certificates on the day India racked up a record.

Earlier this week, the government said India will resume the export of COVID-19 vaccines in the fourth quarter.

In recent days, India has reported more than one crore Covid shots in a day on three occasions - September 6, August 31 and August 27.

It took 85 days to touch the 10-crore vaccination mark, 45 more days to cross the 20-crore mark and 29 more days to reach the 30-crore mark, according to the health ministry.

Nationwide inoculations started in January, with healthcare and frontline workers the first to get the shots. The drive was extended to all adults from May.