During in-person talks with his Australian counterpart Peter Dutton, Defence Minister Rajnath Singh also said that Afghan territory should not be used to threaten or attack any other country. 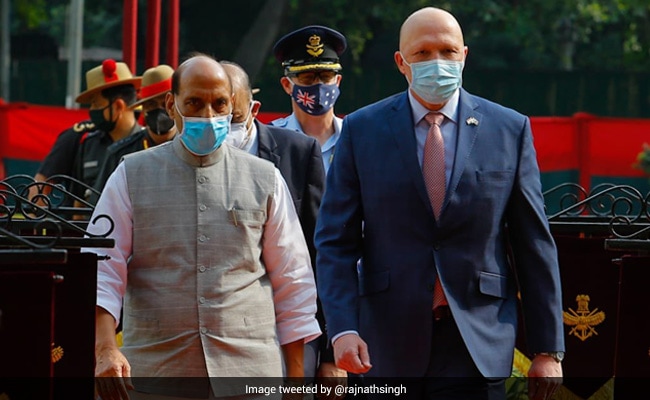 Defence Minister Rajnath Singh on Friday conveyed to his Australian counterpart Peter Dutton that the rise of Taliban raises serious security concerns for India and the region as the terror groups having bases in Afghanistan could get further support to expand their activities, official sources said.

In the in-person talks, Mr Singh also said that Afghan territory should not be used to threaten or attack any other country and emphasised that the international community must do everything possible to ensure the implementation of the UN Security Council resolution 2593 on Afghanistan, they said.

The India delegation flagged concerns over the possible implication of the Taliban's capture of power for the security situation in Jammu and Kashmir as there are apprehensions about spill-over of terrorist activities from Afghanistan to the union territory, the sources said.

Australian Foreign Minister Marise Payne and Defence Minister Dutton arrived in New Delhi on Friday on a three-day visit primarily to take part in the inaugural two-plus-two ministerial dialogue between the two countries.

In his talks with Dutton, Mr Singh also talked about India's concerns over violation of human rights and suppression of rights of women, children and minority communities under the Taliban regime, the sources said.

The Afghan crisis was discussed at length and there was a convergence of views between the two sides on it, the sources said, adding Mr Singh spoke strongly about the need to implement the UNSC resolution adopted on August 30 under India's presidency of the global body.

The resolution demanded that Afghan territory should not be used to threaten or attack any country or to shelter and train terrorists and plan or finance terrorist attacks.

The eastern Ladakh border row between India and China also found brief mention at the talks and the Indian side conveyed that New Delhi is committed to resolving the issue peacefully through talks, the sources said.

In his statement to the media, Mr Singh described the talks as "very fruitful and wide-ranging" and said bilateral defence cooperation, as well as regional issues, figured during the deliberations. He said both sides are keen to work jointly to realise the full potential of the India-Australia comprehensive strategic partnership.

"This partnership is based on our shared vision of free, open, inclusive and rule-based Indo-Pacific region. Both, Australia and India have tremendous stakes in peace, development and free flow of trade, rules-based order and economic growth in the region," he said with Dutton by his side.

He also mentioned Australia's participation at the Malabar exercise in the last two editions.

Mr Singh said both sides agreed that there are opportunities of bilateral collaboration for co-development and co­ production of military equipment and that he invited the Australian industry to take advantage of India's liberalised foreign direct investment policies in the defence sector.

"I apprised Minister Dutton about our recent efforts towards "Atmanirbhar Bharat" (self-reliant India) and growing innovation ecosystem in India. We discussed opportunities to work together in Defence Science and Technology areas," Mr Singh said.

He said India is committed to building a robust partnership with Australia for the security and growth of the entire region.

"I look forward to working with you to take the India­ Australia defence partnership to greater heights," Mr Singh said.

Defence and military cooperation between India and Australia is on an upswing in the last few years.