A booklet by the UP government does not include the Taj Mahal as a tourist destination.

Lucknow: The Taj Mahal, one of the seven wonders of the world and magnet for tourists and celebrities including Princess Diana, who famously posed outside it alone, telegraphing her disintegrating marriage, does not excite the imagination of Yogi Adityanath's administration.

A new booklet released by the Uttar Pradesh government to mark six months of Yogi Adityanath and the BJP winning charge of India's most-populous state makes no mention of the white marble stunner. The brochure was released by Tourism Minister Rita Bahuguna. It catalogues important tourist destinations including the temple in Gorakhpur of which the Chief Minister is the main priest, as well as plans for new attractions including a tour of monuments and locations central to the Ramayana.

"There has been some miscommunication which has undermined the Taj Mahal," said UP minister Sidharth Nath Singh. To illustrate that the state government recognises its value, he said, "We are even thinking of construct an international airport at Agra for the convenience of passengers." 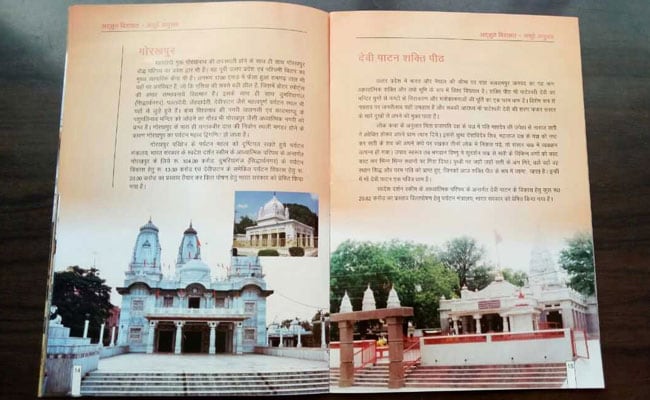 The booklet has tourist destinations including the Gorakhpur temple where Yogi Adityanath is chief priest.

In June this year, Yogi Adityanath unpacked a major headline and buffed up his perception as a hardline Hindu priest when he said that the 17th century monument to love built by Mughal emperor Shah Jahan does not reflect Indian culture; he claimed this is why foreign VIPs are gifted copies of the Gita and the Ramayana now by government officials instead of replicas of the Taj.

Promoted
Listen to the latest songs, only on JioSaavn.com
Opposition leaders said the new brochure proves the UP government discriminates against Muslims and attempts to blank out any part of India's cultural heritage that is not Hindu. "The exclusion of the Taj Mahal shows the mindset of the BJP government," said Rajendra Chaudhary of the Samajwadi Party which was crushed in the March election by the BJP. "The monument has no connection with caste and community," he said, stating it must be preserved and valued as a national treasure.

The state tourism department has said that the Taj Mahal is not being neglected or marginalised. "The booklet was released only for the purposes of a press conference and is not a guide to UP's tourism spots. It mentions new and upcoming projects of the UP tourism department, and new focus areas. There are many ongoing projects of the UP tourism at the Taj Mahal -- a parking project, a Taj Agra fort linkage project and a development project, among others," said Avanish Awasthi, a senior official of the UP Tourism Department.