The Delhi Commission for Women (DCW) chief had been demanding death penalty for rape of minors and setting up of fast-track courts across the country to try rape cases, along with other demands. 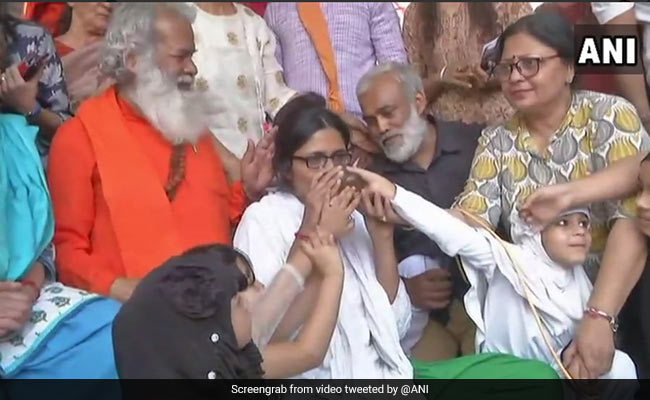 Swati Maliwal was on the hunger strike for the last 10 days at Rajghat.

She was on the hunger strike for the last 10 days at Rajghat.

As she congratulated the people for the ordinance, Ms Maliwal noted that very few protests had achieved so much in such less time, and termed the government's decision a "historic victory" for independent India.

According to the Criminal Law (Amendment) Ordinance 2018, new fast-track courts will be set up to deal with rape cases and special forensic kits will be provided to all police stations and hospitals in the long run.

The ordinance stipulates stringent punishment for perpetrators of rape, particularly of girls below 12 and 16 years. Death sentence has been provided for rapists of girls under 12 years, officials said while quoting the ordinance.

The minimum punishment in case of rape of women has been increased from rigorous imprisonment of seven years to 10 years, extendable to life imprisonment, they said.

In case of rape of a girl under 16 years, the minimum punishment has been increased from 10 to 20 years, extendable to life imprisonment.

The punishment for gangrape of a girl below 16 years will invariably be imprisonment for the rest of life, the officials said.

Stringent punishment for rape of a girl under 12 years has been provided with the minimum jail term being 20 years which may go up to life in prison or death sentence, they added.

Ending her fast, Ms Maliwal said, "Every day children aged three, four or six years are getting raped in a brutal manner. I wrote letters and issued notices. I even submitted 5.5 lakh letters written by citizens to the prime minister, but in vain.

"After which, I decided to sit on a hunger strike. There was no strategy, but gradually people joined the movement across the country. It gained such a momentum that the prime minister after returning to India had to make an amendment in the law. I congratulate the people of India for this victory," she said.

The Delhi Commission for Women (DCW) chief had been demanding death penalty for rape of minors and setting up of fast-track courts across the country to try rape cases, along with other demands.

Amid a nationwide outrage over cases of sexual assault on girls and women at Kathua in Jammu and Kashmir, Surat in Gujarat and Unnao in Uttar Pradesh, the Union cabinet had Saturday approved the ordinance to provide stringent punishment, including death penalty, for those convicted of raping girls below the age of 12 years.

Ms Maliwal had Saturday written to Prime Minister Narendra Modi mentioning her six demands, including the passage of the ordinance, recruitment of police personnel as per the United Nations standards and fixing accountability of the police force.

Promoted
Listen to the latest songs, only on JioSaavn.com
She had also sought that files relating to the recruitment of 14,000 police personnel - approved by the Union home ministry but pending with the finance ministry - be cleared.

Ms Maliwal also put forth her demand for constitution of a high-level committee, comprising Delhi chief minister, home minister and Lieutenant Governor to review safety of women in the national capital.

PM Modi Calls For Need To Understand Culture Of Other Countries