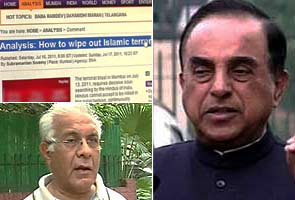 New Delhi: An article by Subramanian Swamy, wherein he talks about revoking the voting rights of Muslims, has snowballed into a huge controversy, with the National Commission for Minorities mulling action against him.

The Commission will take a final view on Tuesday.

Since its publication, Dr. Swamy's article has been hotly debated on micro-blogging sites, and last week it raised a storm in Harvard, where he taught Economics in the 1960s. In an online petition, students and faculty members demanded that Harvard end its association with him.

In the article titled, 'How to wipe out Islamic terror' Dr. Swami, who is also president of the Janata Party said that by 2012, he expected Islam to confront Hindus to "complete unfinished business." He said: "Fanatic Muslims consider Hindu-dominated India an unfinished chapter of Islamic conquests".

NCM chairperson Wajahat Habibullah told NDTV that the Commission did found the article offensive and has consulted legal authorities, who confirmed that it is in violation of law - especially the Indian Penal code.

"We have our proposals ready. They will be presented before the meeting of the National Commission for Minorities on Tuesday. Then we will take a decision as to what the Commission can do," said Mr Habibullah.

Congress General Secretary Digvijaya Singh said it is inflammatory and in bad taste.

Promoted
Listen to the latest songs, only on JioSaavn.com
"It is a very, very bad article; it is seditious also, and action must be taken," said Digvijaya Singh.