Swami Vivekananda delivered his landmark speech on September 11, 1893. The Art Institute of Chicago, where the World Parliament of Religions was held commemorated India's messenger of peace 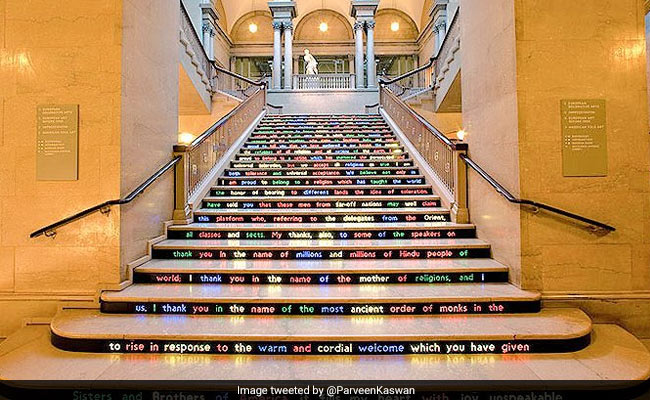 On Swami Vivekananda's birth anniversary today, a post on Twitter made his famous speech at the World Parliament of Religions in Chicago come alive. Words of the landmark speech delivered on September 11, 1893 illuminate the stairs of the Art Institute of Chicago, then known as the Permanent Memorial Art Palace, where the World Parliament of Religions was held. The rise of each step has Swami Vivekananda's lines, starting with his opening words - "Sisters and brothers of America, it fills my heart with joy unspeakable to rise in response to the warm and cordial welcome which you have given us. I thank you in name of the most ancient order of monks in the world; I thank you in the name of the mother of religions; and I thank you in the name of millions and millions of Hindu people of all classes and sects...".

On 11th September 1893 #SwamiVivekanand gave famous speech at Chicago. You know how this place looks like now. These are stairs of Chicago Art Institute where Swamiji's 473 words are still illuminating. Still registering relevancy.

According to the article in publicartinchicago.com, there were 7,000 people present at the Chicago venue and soon as Swami Vivekananda said "Sisters and Brothers of America...," he received "a standing ovation and clapping that lasted for more than three minutes."

The Art Institute of Chicago commemorated Swami Vivekananda's speech with a number of rare photos like the hall where he spoke and several plaques with his quotes and signature.

Here are few quotes from Swami Vivekananda's Chicago speech that left an indelible mark on people across generations:

"Sectarianism, bigotry, and it's horrible descendant, fanaticism, have long possessed this beautiful Earth. They have filled the earth with violence, drenched it often and often with human blood, destroyed civilization, and sent whole nations to despair. Had it not been for these horrible demons, human society would be far more advanced than it is now." - Swami Vivekananda.