I am against any sort of violence. I don't know why I was attacked," Swami Agnivesh told NDTV

Swami Agnivesh said there were no policemen around when he was attacked.

Social Activist Swami Agnivesh was punched, kicked and pushed to the ground allegedly by BJP Yuva Morcha workers in Jharkhand today. The alleged BJP workers had shown black flags and raised slogans against him. The activist had offered a dialogue, but got abuses in return.

Chief Minister Raghubar Das has asked the police to thoroughly investigate the incident.

Swami Agnivesh, was attending an event in Pakur, about 365 km from state capital Ranchi. He was flanked by tribals who were holding bows and arrows. He was attacked by a mob as soon as he came out of his hotel. The alleged BJP workers were chanting "Jai Sri Ram" as they thrashed the 80-year-old activist.

"I am against any sort of violence. I am known as a peace-loving person. I don't know why I was attacked," Swami Agnivesh told NDTV.

The BJP has condemned the attack and clarified that the attackers weren't associated with the party, but in the same line added that one shouldn't see the attack in isolation and "Swami Agnivesh's 'track record' is such that the reaction doesn't come as a surprise".

"There is no place for violence in democracy. Swami Agnivesh should have organised for his security," P Shahdeo, Jharkhand BJP spokesperson, said.

He added that Pakur has been in news for religious conversions.

Swami Agnivesh said he had informed the administration about his arrival. But there were no policemen around even after the protesters had gathered outside his hotel. Local reporters said BJP youth wing's workers were protesting his visit, but he was completely taken aback when he was attacked, he said.

"I had offered to hold a dialogue with them. But nobody came to speak to me. I was going to a sammelan (seminar) with my tribal friends when they launched an attack. They were carrying black flags and without any warning pounced on me. They punched, kicked and dragged me on the ground. They also used cuss words," Swami Agnivesh told NDTV. 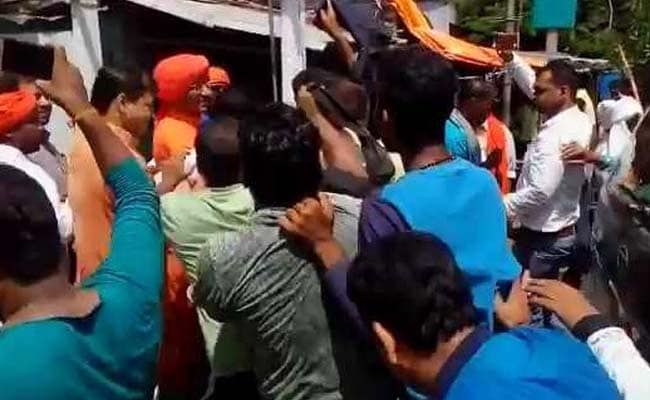 Swami Agnivesh was attacked when he stepped out of his hotel to attend a seminar.

The activist likened the attack to mob lynchings that have been reported in several states in the past one year. In all the cases, the blood-thirsty mobs had consumed rumours on social media, especially WhatsApp, about cow smuggling and presence of child kidnappers in their area.

"I pleaded with them with folded hands... But they didn't think it was necessary to tell me why they were raining blows on me. They just went on and on," Swami Agnivesh said.

Strongly condemn the murderous attack on Swami Agnivesh in BJP ruling state Jharkhand by BJP goons. These state sponsored BJP gundas don't have any fear of law. Culprits must be punished. BJP should apologise for this shameful & gruesome act. pic.twitter.com/3lJy0UOizr

Swami Agnivesh was rushed to hospital where doctors are running tests on him. He says that the stone that missed his head landed on his ribs and he is in immense pain.

The attack appears to be pre-meditated, police said. They have detained 20 men and are sifting though the CCTV footage before making further arrests.