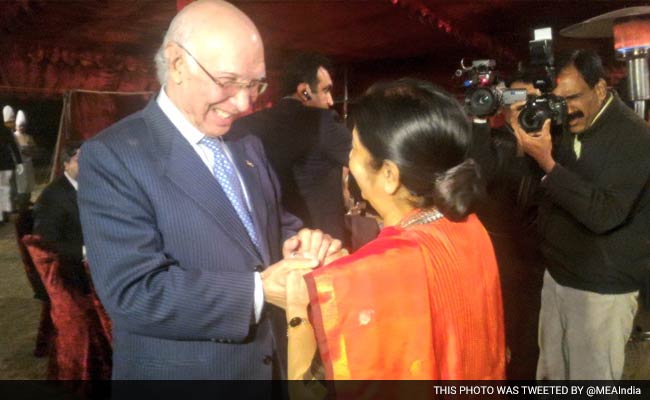 Sartaj Aziz greeted Sushma Swaraj warmly and both engaged in a brief conversation.

Islamabad: External Affairs Minister Sushma Swaraj on Tuesday met her Pakistani counterpart Sartaj Aziz during a banquet hosted by him for the heads of delegates participating in a multilateral conference on Afghanistan.

Ms Swaraj arrived in Islamabad on a two-day visit, primarily to attend the 'Heart of Asia' 5th Ministerial Meeting on Afghanistan on Wednesday.

She will hold talks with Mr Aziz and call on Prime Minister Nawaz Sharif on the sidelines of the conference today.

The fifth 'Heart of Asia' conference, an annual gathering of Asian and other countries, is aimed at enhancing cooperation for countering security threats and promoting connectivity in the region.

The high-ranking delegations from 14 participating states, 17 supporting countries and 12 international and regional organisations are participating in the two-day conference.

After arriving in Islamabad, Ms Swaraj said the relationship between the two countries should be better and that she will hold talks with Pakistani leaders to find ways to improve bilateral ties.

"I have come with the message that ties between the two countries should be good and move forward," said Ms Swaraj.

The foreign minister's visit comes after talks between the National Security Advisors of India and Pakistan in Bangkok on Sunday, where they discussed terrorism, Jammu and Kashmir and a range of key bilateral issues apart from agreeing to carry forward the "constructive" engagement.