Former Bihar Deputy Chief Minister Sushil Kumar Modi filed his nomination papers at the Patna Commissioner office in presence of a host of leaders of the ruling NDA. 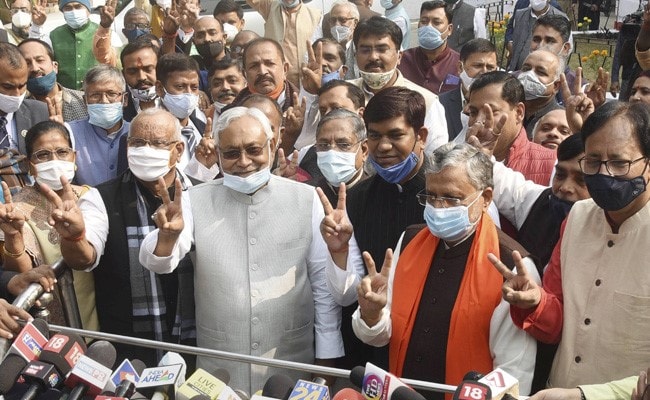 The leaders flashed a victory sign, confident that Sushil Modi will sail through

Veteran BJP leader Sushil Kumar Modi on Wednesday filed his nomination papers for by-election to a Rajya Sabha seat in Bihar which has been necessitated by the death of Union minister Ram Vilas Paswan.

Sushil Kumar Modi filed his nomination papers at the Patna Commissioner office in presence of a host of leaders of the ruling NDA, most notable being Chief Minister Nitish Kumar, whose deputy he had been for more than a decade, sharing an excellent rapport that has been a stuff of legend in the states political circles.

"I have come here to congratulate my former colleague. He is currently an MLC and formerly been a member of the Lok Sabha and an MLA before that."

"With his election to the Rajya Sabha he will hold the a distinction of having been a member of both houses of the Parliament and the state legislature", Nitish Kumar told reporters smilingly.

Nitish Kumar, who has two BJP legislators Tarkishor Prasad and Renu Devi as his deputies in his fourth tenure that began last month, remarked wistfully that he would have preferred Sushil Kumar Modi by his side "but it is a decision of his party (BJP)".

"Our wish is known to everybody. But, now that they want to take him to the Centre, we are hopeful that in his new capacity he will continue to serve Bihar", said the JD(U) president in a cryptic remark that lends credence to speculations that Sushil Kumar Modi might be accommodated in the Union council of ministers.

Earlier, Sushil Kumar Modi whose vigorous efforts in highlighting the fodder scam had made him a household name in Bihar in the 1990s when the BJP was still trying to make a mark in the states politics, visited the party office at the Birchand Patel Marg and received a rousing welcome.

The leaders flashed a victory sign, confident of Sushil Kumar Modi sailing through with the NDA enjoying a majority in the 243-member assembly.

If the opposition Grand Alliance fails to field a candidate by the last date of filing nominations on Thursday, Sushil Kumar Modi might end up getting declared elected unopposed on December 07 when withdrawal of nominations come to a close.

Voting and counting are scheduled on December 14.

The opposition coalition, in particular its largest constituent RJD, which has been at the receiving end of Sushil Kumar Modi's attacks on Lalu Prasad and his family, had reacted with predictable peeve when his candidature was announced by the BJP.

The party had thrown a fit over the seat being denied to the Lok Janshakti Party, founded by the late Ram Vilas Paswan, out of "khunnas" (spite) against his son Chirag who now heads the party and had dented the NDA in the recently held assembly elections by going solo.

The RJD had also offered to support the LJP if it considered fielding Reena Paswan, the late minister's wife.

However, Chirag categorically ruled his party out of the race on Tuesday when he told reporters "I appreciate the gesture made by the RJD and the consideration shown by them for us. But my mother is not interested in entering politics as of now".

Ram Vilas Paswan reiterated his contention "the seat originally belonged to the BJP. Following my father's death, it is the party's prerogative to take a decision".

Notably, Ram Vilas Paswan had got elected to the Upper House last year from the seat that fell vacant upon the election of his cabinet colleague Ravi Shankar Prasad from Patna Sahib Lok Sabha seat.

When asked whether the LJP, which has one member in the assembly, would support Modi in the by-poll, the 37-year-old replied "why not".

The young LJP chief, who has been relentless in his attacks on the JD(U) boss but professed loyalty towards BJP and Prime Minister Narendra Modi, is reportedly eyeing a berth in the Union council of ministers in which his party is left with no representation.

The party, which has six MPs in the Lok Sabha, is hopeful that it would be accommodated by the BJP-led government since no ally, with the exception of Ramdas Athawale of Maharashtra-based RPI, is now left in the Union council of ministers.

The BJP enjoys a brute majority in the Lok Sabha but is said to be worried over recent exits, from the NDA, by powerful regional allies like Shiv Sena, Akali Dal and Telugu Desam Party sending out wrong signals.