Asaram's Son Narayan Sai Denied Furlough In Rape Case: The Supreme Court said that furlough is not an absolute right and it depends on various factors. 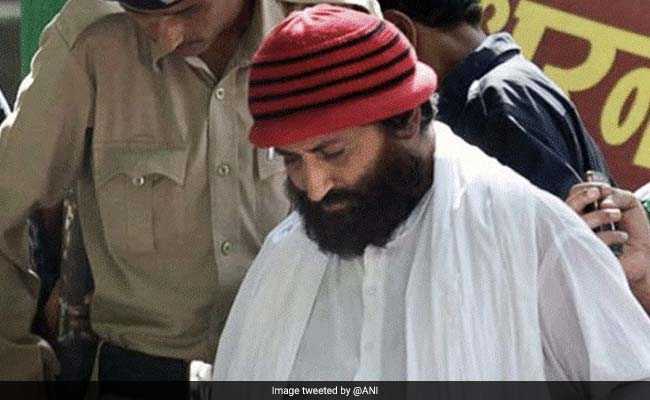 A bench of Justices DY Chandrachud and BV Nagarathna allowed the appeal of the Gujarat government challenging the June 24 order of the high court granting furlough to Narayan Sai.

The Supreme Court said that furlough is not an absolute right and it depends on various factors.

It said the jail superintendent has given a negative opinion for grant of furlough to Narayan Sai as a mobile phone was found from his cell.

On August 12, the Supreme Court had put on hold the Gujarat High Court order giving two-week furlough to Narayan Sai.

The Supreme Court had issued a notice to Narayan Sai on the Gujarat government's plea challenging the high court's single-judge order of June 24 and put it on hold till further orders.

It had said that the proviso to Rule 3(2) of the Bombay Furlough and Parole Rules 1959, provides that a prisoner sentenced to life imprisonment may be released on furlough "every year" after he completes seven years actual imprisonment.

The single-judge bench of the high court ordered the release of Narayan Sai on furlough for two weeks on June 24, 2021, but the division bench had stayed it till August 13 and thereafter the state has moved the Supreme Court challenging the June 24 order.

The Gujarat government has contended that under the rules and even in a judgement of this court, it has been held that furlough is not an absolute right and it depends on various factors.

It had said Narayan Sai and his father Asaram were arrested for offences under rape charges and they wield considerable influence with money and muscle power.

In 2013, Asaram was arrested for raping a girl in Rajasthan after two Surat-based sisters had accused Asaram and his son of sexual exploitation.

The elder sister had accused Asaram of sexual assaulting her between 1997 and 2006 when she lived at his Ahmedabad ashram.

The younger sister had accused the Asaram's son of sexual assault when she lived at Asaram's ashram in the Jahangirpura area of Surat between 2002 and 2005.

The incidents of multiple sexual assaults and unnatural sex with the victim had taken place between 2002 and 2005, but the case against Narayan Sai had been filed only in 2013.

Narayan Sai was arrested from the Delhi-Haryana border in December 2013.

When Narayan Sai was in jail, the Surat police had claimed to have unearthed elaborate plans to bribe police officers, doctors, and even judicial officers to weaken the case against him.