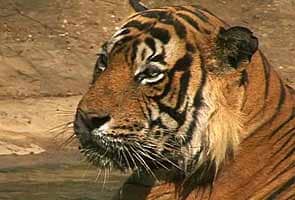 New Delhi: Supreme Court has today ordered that tourism be banned in core areas of all tiger reserves in the country.

The court had earlier directed the National Tiger Conservation Authority (NTCA), under the Ministry of Environment and Forests (MoEF), to submit final guidelines related to tourism in core area by July.

The court will hear now the matter on August 22 next, to examine the guidelines submitted by the authority.

The court also asked, "Why should tourism be allowed in core area?  Tigers are practically on the verge of extinction whatever the statistics."

The court also slammed the Madhya Pradesh, Tamil Nadu, Bihar, Maharashtra and Andhra Pradesh governments for not notifying the buffer and core areas in tiger reserves in their states. Only once buffers are notified can only tourism be banned in core areas.

These states will now have to pay Rs 10,000 as fine. They have been given three weeks to issue notification on buffer zones in tiger reserve in their states.

Promoted
Listen to the latest songs, only on JioSaavn.com
Tour operators have been opposing the ban, but the court stuck to its decision.