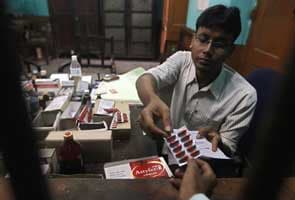 Novartis fought a seven-year legal battle to gain patent protection for an updated version of its blockbuster cancer drug Glivec, arguing that the compound was a significant improvement because it is more easily absorbed by the body.

But in a ruling that went to the heart of patent law in a country known as the "pharmacy to the world", the top court said the compound "did not satisfy the test of novelty or inventiveness" required by Indian legislation.

The court dismissed the Novartis' case "with legal cost", which means the firm must pay undisclosed legal expenses.

The case is the most high-profile of several battles being waged in India. It was seen as having far-reaching implications in defining the extent of patent protection for multinational drug firms operating in the lucrative market.

"The ruling has come as a big relief," Leena Menghaney, a lawyer with medical charity Medecins Sans Frontieres (MSF), said outside the courtroom. "It will save a lot of lives -- not only in India but across the developing world."

"The ruling doesn't mean no patents will be granted in India, but the abusive practice of seeking many patents for one drug will be curbed," she added.

MSF says Glivec -- often hailed as a "silver bullet" for its breakthrough in treating a deadly form of leukaemia -- costs $4,000 a month in its branded form while the generic version is available in India for around $73.

Novartis, which reported net profit of $9.6 billion in 2012 on sales of $56.7 billion, condemned the judgement, saying in a statement it "discourages innovative drug discovery essential to advancing medical science for patients".

"This ruling is a setback for patients that will hinder medical progress for diseases without effective treatment options," said Ranjit Shahani, managing director of Novartis India.

Shares of Novartis India, the local unit of the Basel-headquartered group, were down 4.31 percent at 573.00 rupees while Indian generics giant Cipla climbed 2.12 percent to 387.80 rupees.

The Supreme Court upheld the view of India's Intellectual Property Appellate Board, which refused to grant Novartis protection in 2009 on the grounds that the amended form of Glivec was not vastly different from the earlier version.

The Madras High Court had also rejected Novartis' arguments in 2007.

Lawyer Anand Grover, representing the Cancer Patients Aid Association in the case, said he was "ecstatic", adding that the ruling will "go a long way in providing affordable medicine for the poor".

India's huge generic drug industry has been a major supplier of copycat medicines to treat diseases such as cancer, TB and AIDS for those who cannot afford expensive branded versions across the developing world.

The copycat drugs industry, which supplies one-fifth of the world's generics, grew into a powerhouse because the country did not issue drug patents until 2005 when it began complying with World Trade Organisation rules.

Pratibha Singh, a lawyer acting on behalf of generics group Cipla, said the judgement "makes it clear you cannot patent a drug by just making some minor modifications -- the key Section 3(d) of the patent law has been upheld by the court".

Promoted
Listen to the latest songs, only on JioSaavn.com
At the same time, the market is difficult to ignore and is set to touch $74 billion in sales by 2020 from $11 billion in 2011, according to industry estimates.