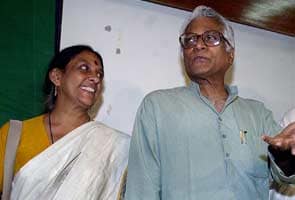 New Delhi: Former Samata Party president Jaya Jaitly was today allowed by the Supreme Court to meet her party colleague and  former Defence Minister George Fernandes once every fortnight for 15 minutes. Mr Fernandes is bed-ridden and suffers from Alzheimer's disease.

A bench headed by Justice P Sathasivam allowed the plea of Ms Jaitly who had approached the apex court after the Delhi High Court had denied her the permission to visit the ailing 82-year-old leader.

Ms Jaitly, a close political associate of Mr Fernandes, had earlier moved the high court after the ailing leader's family members had not allowed her to meet him.

The High Court had on April 17 denied her the permission to visit him. The court had said she had no legal right to claim visitation rights to the former Samata Party leader.

Promoted
Listen to the latest songs, only on JioSaavn.com
Ms Jaitly had sought permission from the high court to visit the ailing leader on the ground that she has been his close political colleague and confidante for more than 30 years and that he required aid and assistance from his old friend.She had claimed Mr Fernandes should not be deprived of his basic human rights to meet acquaintances and friends. Her plea was opposed by Mr Fernandes' wife and brothers on the ground of her locus standi. They had contended she could not be added as a party because she had no legal status.

Ms Jaitly subsequently had moved the Supreme Court, which had on July 20 sought the response of Mr Leila Kabir, Fernandes's wife, on her plea seeking visitation rights.