In 2018, the Indian Navy kick-started the process to procure 57 multi-role combat aircraft for its carriers, which use the ski-jump take off mechanism. 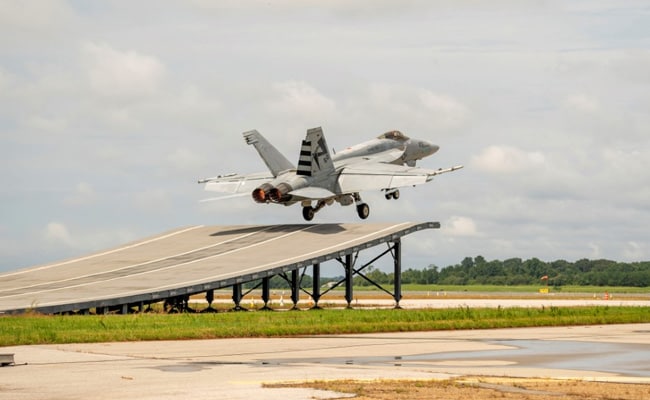 Leading aerospace company Boeing has said its F/A-18 Super Hornet fighter jet has successfully performed a ski-jump launch, which is take off from a short distance upward-curved ramp, demonstrating the plane's suitability for the Indian Navy's aircraft carriers.

"Officials from the Indian Embassy in Washington DC witnessed the test," said Ankur Kanaglekar, an official of the aircraft manufacturer, at a virtual press briefing.

In 2018, the Indian Navy kick-started the process to procure 57 multi-role combat aircraft for its carriers, which use the ski-jump take off mechanism.

Our F/A-18 #SuperHornet demonstrates the ability to operate from @indiannavy aircraft carriers during its successful and safe launch from a ski-jump ramp. pic.twitter.com/92V14EXV9M

"We understand that the aircraft has to maneuver and it has to fit. From that regard, we have a solution and it is safe and it takes care of the Indian Navy's requirements of fully operating the aircraft on the carrier," he stated.

Currently, the Indian navy has only one aircraft carrier -- the INS Vikramaditya -- which is a Russian origin ship. India's first indigenous carrier INS Vikrant is likely to be inducted into the Indian Navy by 2022.

The trials were held at a US naval air station at Patuxent River in Maryland and they showed that the Super Hornet would do well with the Indian Navy's Short Takeoff but Arrested Recovery (STOBAR) system, the aircraft manufacturer said, adding that the trials validated its earlier simulation studies.

Mr Kanaglekar said at the press briefing: "The multi role frontline US fighter jet's latest variant Block III, which is on offer, will provide several unique advantages to the Indian Navy. First, our offer of two-seater and single-seater variants, both of which are carrier compatible, will allow the Indian Navy to execute missions from the carrier that benefits from having a second crew."

Second, Super Hornet can act as a lynchpin of the naval aviation collaboration between the US Navy and the Indian Navy that will improve interoperability between the two navies, he said.

Third, it will interface with P-8I aircraft and other assets of US origin to act as a force multiplier for the Indian Navy, he mentioned.

As part of Boeing's proposed "By India, for India" sustainment program, Block III Super Hornet aircraft can be serviced in partnership with the Indian Navy as well as India and U.S. based partners throughout the lifecycle of the aircraft.

The Super Hornet will offer the Indian Navy value in the form of advanced warfighter technologies at a low acquisition cost and affordable cost per flight hour because of its ease of maintainability design and durability, Mr Kanaglekar mentioned.