The cyclone is being continuously tracked by the Doppler Weather Radar (DWR) at Vishakhapatnam in Andhra Pradesh. 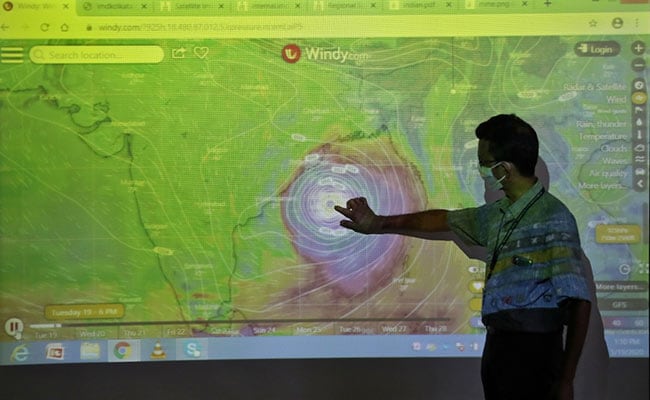 This is the second super cyclone over the Bay of Bengal in two decades. (Reuters)

Super cyclone "Amphan" weakened into an extremely severe cyclonic storm on Tuesday as it moved closer to the coast, triggering rainfall in several parts of Odisha, where the state government stepped up efforts to evacuate people in vulnerable areas.

The system is likely to move north-northeastwards over Bay of Bengal and cross West Bengal-Bangladesh coasts between Digha and Hatiya Islands during Wednesday afternoon or evening as a very severe cyclonic storm with maximum sustained wind speed of 155-165 kmph gusting to 185 kmph, he said.

The cyclone is being continuously tracked by the Doppler Weather Radar (DWR) at Vishakhapatnam in Andhra Pradesh.

Under its impact, light rain was witnessed in several areas of Puri, Kendrapara, Jagatsinghpur and Khurda districts of Odisha, and the intensity of rainfall and wind speed was likely to increase gradually, a Met official said.

IMD Director General Mrutyunjay Mohapatra said since the super cyclone is gradually weakening, its impact is unlikely to be very severe on Odisha.

However, coastal districts like Jagatsinghpur, Kendrapara, Bhadrak and Balasore are likely to be battered by heavy rain coupled with high velocity winds from Tuesday evening, he said.

Several parts of Jajpur and Mayurbhanj districts are also expected to be lashed by torrential rain and high speed winds, he said. Wind speeds will be in the range of 110 kmph to 120 kmph and may even go up to 135 kmph in coastal regions of Odisha from Tuesday night till Wednesday.

Special Relief Commissioner (SRC) PK Jena said evacuation of people living in low-lying areas, thatched and mud structures in the coastal districts is under progress and the process will be completed by evening.

He said the state government has made arrangements for evacuating over 11 lakh people as a precautionary measure.

Evacuation exercise is also being undertaken in some areas of Gajapati district in view of a possible landslide, he said.

As per IMD forecast, no abnormal storm surge is expected to occur due to the cyclone in Odisha, Mr Jena said.

Fifteen units of National Disaster Response Force and 15 teams of Odisha Disaster Rapid Action Force (ODRAF) have been deployed in the districts likely to be hit.

"We are in constant touch with the collectors of the 12 districts which have been put under alert in view of the cyclone. We are fully prepared to deal with any eventuality," Mr Jena said.

Chief Secretary AK Tripathy said four senior officers with vast experience in handling such calamities have been deputed to different districts on the direction of Chief Minister Navin Patnaik to supervise preparations and guide the local administration.

As high velocity winds may damage power infrastructure and roads, necessary equipment and manpower have been mobilised in order to ensure quick restoration in the affected areas, he said.

All fishermen along with boats and vessels have already returned from the seas and they have been advised not to venture out for fishing activities till May 21, the SRC said.

The cyclone comes a year after "Fani" barrelled through vast areas of Odisha on May 3 last year, claiming at least 64 lives and destroying infrastructure in power, telecom, water supply and other vital sectors.