The crater at the village in Rajasthan's Barmer where the Sukhoi 30 aircraft crashed today.

Jaipur: Three people were injured as a Sukhoi 30 aircraft of the Indian Air Force crashed near an air base in Rajasthan's Barmer this afternoon. Both pilots have managed to eject to safety, sources said. This was the third crash of Sukhoi - a frontal aircraft of the Air Force - in Rajasthan.

The plane was on a routine sortie and was about to land at the Uttarlai Air Force Base, at a village called Devaniyon ki Dhani, when the crash took place around 2 pm. The fuselage of the aircraft landed on the hut of Narayan Ram, injuring him, his daughter-in-law Dalli and grandson Hanuman.  The three, who sustained burn injuries, have been admitted in hospital.

Omji Ujjawal, a police officer from the area who was the first to reach the spot, said Narayan Ram's family suffered "burn injuries due to the explosion and cuts and bruises from the debris".

Altogether, half-a-dozen houses in the village and two motorcycles were destroyed. The villagers said livestock also came to harm - a buffalo was burnt alive and some goats were injured.

The air force has ordered an inquiry into the crash.

Last May, defence minister Manohar Parrikar said since April 1, 2014, the twin-engine Sukhois have been forced to land on a single engine on 34 occasions after facing engine problems mid-air.   The operational reliability improvement programme is pursued regularly with Russian Original Equipment Manufacturer, he had told the Lok Sabha.

Promoted
Listen to the latest songs, only on JioSaavn.com
Earlier today, a Chetak helicopter on a routine training sortie from Bamrauli, Allahabad, had developed a technical failure. The aircraft toppled while the pilots were trying to land in an uneven field. Both pilots are safe. An inquiry has been ordered into the accident. 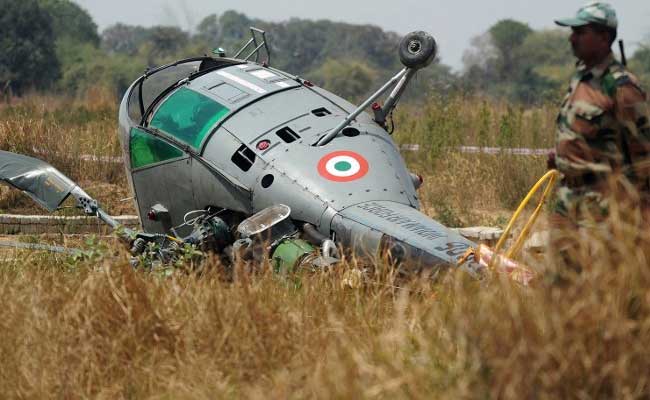 The Chetak helicopter had toppled over while landing near Allahabad.