PM Modi and Mr Guterres met last week on the sidelines of the G-20 Summit in Buenos Aires, Argentina, where the two held discussions about climate change and India's support for the Paris Climate Agreement. 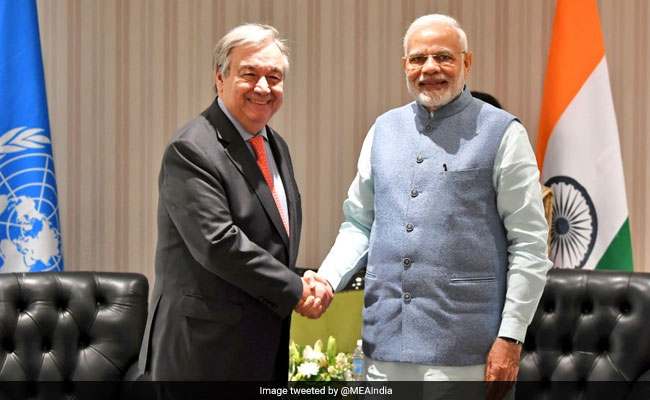 Prime Minister Narendra Modi has told UN Secretary General Antonio Guterres the motivation for his "strong commitment" to climate action is rooted in the ancient Hindu scriptures, the Vedas.

PM Modi and Mr Guterres met last week on the sidelines of the G-20 Summit in Buenos Aires, Argentina, where the two held discussions about climate change and India's support for the Paris Climate Agreement.

The UN chief thanked PM Modi for his commitment to increase India's nationally determined contributions to the Paris Agreement. Mr Guterres had also held discussions with PM Modi during his three-day visit to India this year coinciding with Mahatma Gandhi's birth anniversary on October 2. During that visit, Mr Guterres had presented the Indian leader with the United Nations Champions of the Earth Award for policy leadership for 2018.

"I was speaking to Prime Minister [Narendra] Modi of India recently and asking him what was his motivation for his very strong commitment to climate action and he said it's in the Vedas, the founding books of Hinduism," Mr Guterres said at a press conference in Poland on Monday.

He was responding to a question on whether he thinks religions have a role to play in the field of climate change. The transcript of the Secretary General's joint press conference with Polish President Andrzej Duda was issued by the UN spokesperson's office.

Mr Guterres is in the Polish city Katowice for the high-level UN COP24 Climate Change Conference. The two-week 24th conference of the parties to the UN Climate Change Convention (UNFCCC) marks the deadline for the 197 parties that signed the Convention, to adopt guidelines for the implementation of the historic 2015 Paris Agreement.

In Paris, three years ago, countries collectively agreed to keep global temperature rises to no more than 2 degrees Celsius above pre-industrial levels, and if possible, to limit the rise to 1.5 degrees Celsius. Now, in Poland, they have to agree on how they will achieve this collectively.

Mr Guterres was asked the question in a reference to Pope Francis' views on climate change.

"I do believe that if one is a believer and one believes that the world is created by God, it must be terrible to see human beings destroying God's creation. So I think it's perfectly normal that a religion that believes in the work of the Creator is totally against the destruction of the work of the Creator that human beings are [carrying out at present]. So I think it is perfectly normal that his Holiness the Pope, not only this Pope, it comes from the past, have a very positive position in relation to climate action," he said.

Pope Francis has in the past called for a "revolution" to combat climate change, saying the consensus was clear and "doomsday predictions can no longer be met with irony or disdain".

Kicking off the high-level event in Poland, along with several other high-level representatives, Mr Guterres highlighted key messages for the thousands of representatives of the world's nations, non-profit organisations, UN agencies, and private sector companies gathered in Katowice.

The Secretary-General noted that climate change is already "a matter of life and death" for many people, nations and countries of the world, and that the science is telling us we need to move faster.

Citing various alarming UN reports - including one on rising global CO2 emissions and another one on increasing greenhouse gas concentrations in the atmosphere - he called on nations to pay attention to the science and step up their pace as well as their ambitions.