The Supreme Court asked the Tamil Nadu government to install a process by which farmers can report misbehavior by bank officials while trying to make them pay up. 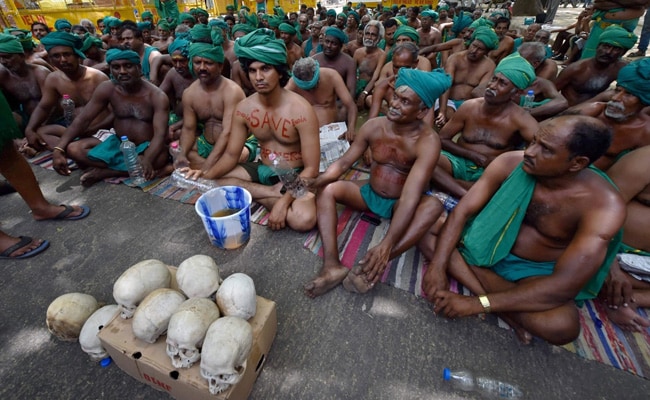 Tamil Nadu farmers had protested for over a month in Delhi, demanding help on their loans.

New Delhi: The government's job is to prevent farmers from committing suicide and not distribute compensation after they have died, the Supreme Court told Tamil Nadu in strong words today, asking it to ensure that no coercive action is taken against farmers who default on loans by installing a process by which they can report misbehavior by bank officials trying to make them pay up.

The court was hearing a petition by a non government organisation for relief to debt-ridden farmers, many of who, it said, have committed suicide because of their inability to pay back bank loans. The petitioner told court that while a big bank loan defaulter like liquor baron Vijaya Mallya was allowed to leave the country, small farmers are humiliated by officials from lending banks who often seize their tractors and other assets if they are unable to repay their loans.

The court told the Tamil Nadu government that it must strike at the heart of the matter and take "preventive steps rather than compensatory steps" to help farmers in the state, which is reeling under the impact of its worst drought in 140 years.

One such step, judges said, should be that the government pick up the farmer's produce directly from villages to eliminate middlemen, who exploit them.

The court also asked about the schemes that the state runs for the benefit  of farmers. Tamil Nadu told the court that there are a lot of schemes and that the cost of crop insurance is shared by centre and state.

Earlier this week, the Supreme Court had stalled an order by the Madras High Court that directed the state government in April to waive loans of all farmers who incurred losses during a drought last year in the state.

The High Court had extended the Tamil Nadu loan waiver scheme to all farmers, even though it was intended to help only small and marginal farmers with up to five acres of land. It had also ordered cooperative societies and banks to waive the loans and not recover any dues. The state government had moved the Supreme Court in May against the order, saying it could ill-afford such a waiver for all farmers.

The judges accepted the Tamil Nadu government's argument that the scheme must provide relief only to small and marginal farmers. The court will continue hearing that case after four weeks.

Tamil Nadu farmers, demanding help on their loans, had earlier this year protested for over a month at Jantar Mantar in Delhi, shaving their heads and moustaches and holding mice and snakes in their mouths. They conducted mock funerals, flogged themselves and even carried skulls of other farmers who had committed suicide due to debt.

Promoted
Listen to the latest songs, only on JioSaavn.com
With 60 per cent deficit in rainfall, Tamil Nadu has witnessed its worst drought in 140 years. 17 farmers were reported to have committed suicide between November 2016 and January this year in the state.

The farmers have demanded a Rs. 40,000-crore drought relief package and farm loan waivers. They had called off their protest after an assurance from Chief Minister E Palaniswami that their demands will be met, but have threatened to renew their protests and now want the Centre to announce a relief package for them.