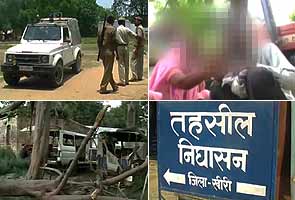 Lucknow: The Crime Branch (CB) of the Uttar Pradesh Criminal Investigation Department (CID) today filed status report on investigation into the alleged rape and murder of a 14-year-old girl in Lakhimpur district before the Lucknow bench of the Allahabad High Court. The court has fixed July 4 as the next date of hearing.

A division vacation bench of Justices SN Shukla and DK Arora was hearing a PIL by a local lawyer seeking direction for a CBI probe into the case and a direction for compensation of Rs 25 lakh to the victim's family to be deducted from the policemen concerned.

14-year-old Sonam's body was found hanging inside the Nighasan police station on June 10, sparking protests from opposition parties in the state.

The victim's mother in her complaint had alleged that the girl was raped and murdered after which 11 policemen were placed under suspension.

While local police ruled out murder citing post mortem report, the state government has ordered a CB-CID probe. It has also removed SP Lakhimpur and lodged an FIR against three policemen.

The second post mortem conducted by a panel of expert from Lucknow confirmed that the girl was strangulated, but ruled out rape.