Statue Of Unity Gets More Tourists Than Statue Of Liberty: PM Modi

In his address after flagging off eight trains to Kevadia from across India via video conferencing, PM said with increased connectivity over a lakh people will visit Kevadia daily, as per a survey. 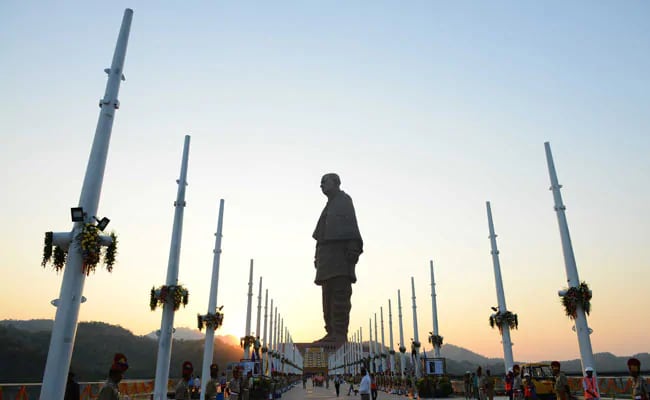 PM Modi inaugurated the Statue of Unity, billed as the world's tallest, in October 2018. (File)

More tourists visit the Statue of Unity in Gujarat than the Statue of Liberty in the US, Prime Minister Narendra Modi said on Sunday, adding almost 50 lakh tourists have visited the former since it opened two over years ago.

In his address after flagging off eight trains to Kevadia from across India via video conferencing, PM Modi said that with increased connectivity over a lakh people will visit Kevadia daily, as per a survey.

PM Modi inaugurated the Statue of Unity, billed as the world's tallest, in October 2018 on the occasion of Sardar Vallabhbhai Patel's 143rd birth anniversary.

Besides tourists visiting the Statue of Unity, locals will be the biggest beneficiary of the new rail connectivity, PM Modi said. Even the pilgrims visiting a few centres located in the region will get the benefit of new trains to Kevadia, he added.

"Today, Kevadia is no longer a small block located in a remote area of Gujarat but is emerging as the world's biggest tourist destination. More people have started visiting the Statue of Unity compared to the Statue of Liberty. After its inauguration, nearly 50 lakh people have visited it.

"Despite everything remaining closed for months during coronavirus pandemic, the number of tourists visiting Kevadia is increasing fast," PM Modi said.

"It is estimated in a survey that as the connectivity increases, over one lakh people will visit Kevadia daily. A small, beautiful Kevadia is a good example of how economy and ecology can both be developed in a planned manner while saving the environment," PM Modi said.

"Tourists visiting the Statue of Unity will get the benefit of this rail connectivity, but this connectivity is going to change the lives of people of Kevadia. It will bring new opportunities of employment and self-employment," he said.

"This rail line will also connect important places of faith like Karnali, Poicha and Garudeshwar. And it is true that the entire region is filled with spiritual vibration. And with this facility, it is a big gift for those who generally visit here for spiritual reasons," he said.