The Khaleej Times quoted family sources to report that Boney Kapoor, waiting to take Sridevi out to dinner, found her motionless in the bathtub of her room at the Jumeirah Emirates Towers.

Film actress Sridevi was found dead in Dubai on Saturday. She was 54 (File photo)

Mumbai: Actor Sridevi, who was initially thought to have died of a cardiac arrest on Saturday, had drowned in the bathtub of her hotel in Dubai, the police there said today. The autopsy report listed "accidental drowning" as the cause of death. In its official twitter handle, the  Dubai government's media office said the case was being transferred to the "Dubai Public Prosecution" which will carry out regular legal procedures followed in such cases.

It is not yet known why she had collapsed. Bobby Naqvi, National Editor of Gulf News, told NDTV that the postmortem report mentioned that there were "traces of alcohol in her blood". Gulf News said according to the report, the actor fell into the bathtub, lost consciousness and drowned.

The sudden death of the 54-year-old had sent shockwaves across the country on Sunday morning, leaving the film industry and legions of her fans heartbroken.

Khaleej Times reported that Sridevi had collapsed in the bathroom of the Jumeirah Emirates Towers hotel in Dubai, where the family had gone to attend the wedding of her nephew Mohit Marwah. Around 7.30 pm, she was found in the bathtub by her husband Boney Kapoor, who had dropped off their daughter Khushi in Mumbai and returned Dubai reportedly to surprise his wife. The couple had planned to go out for dinner.

When an ambulance was called in, the medical staff failed to revive her. Around 9 pm, the police wss called in. The actor was transferred to a hospital, where the doctors declared her dead at 11 pm.

Another account, however, said Sridevi was found unconscious in the washroom by the hotel staff. 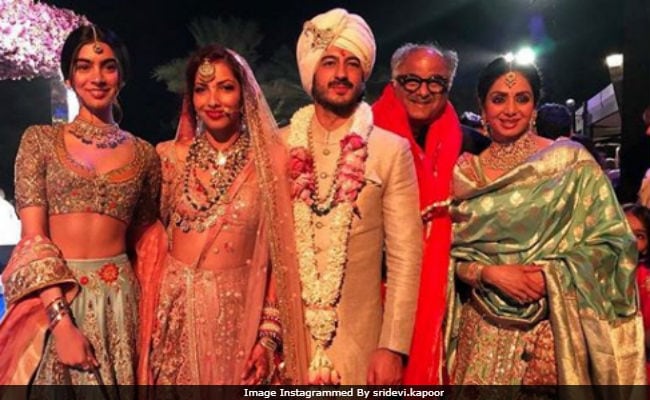 Sridevi had gone along with husband Boney Kapoor and daughter Khushi for a family wedding.

Sridevi's body will be brought back to Mumbai for the funeral in a chartered jet, but it is not clear when.

Indian officials are working closely with the authorities in UAE to expedite the return of Sridevi's body, reported news agency Press Trust of India, quoting Indian envoy to the UAE Navdeep Suri. The Dubai police, he said, can release it only after receiving another "clearance" but did not clarify its nature. "It is their internal process. We do not know," PTI quoted him as saying.

News agency Reuters reported that the embalming of the body is yet to start. It is likely to be carried out by noon tomorrow at Sonapur, the report said.

The unexpected tragedy has shaken the film fraternity. Several actors have cancelled film shoots. Actress Shabana Azmi tweeted to say she and husband Javed Akhtar were calling off the Holi party they host every year. 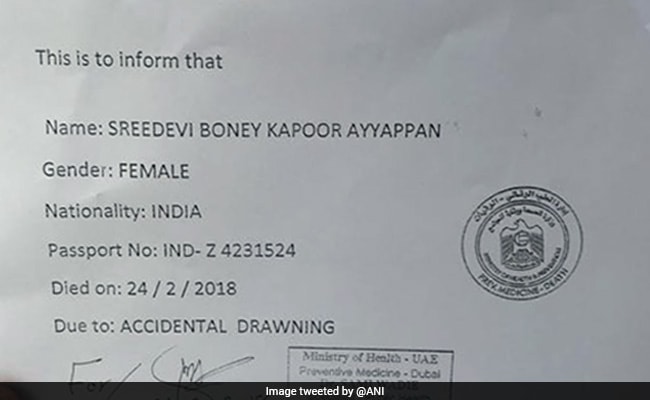 The Dubai authorities' report that mentions Sridevi's cause of death

Through the day, high profile visitors were seen streaming into the house of actor Anil Kapoor -- the younger brother of Boney Kapoor and Sridevi's co-star in many films. In the evening, southern superstar Kamal Haasan - who starred with Sridevi in 27 films -- reached Anil Kapoor's home to meet the family, with whom he said he was close. Rajinikanth, who was Sridevi's co-star of many films, is likely to attend the funeral.

Sridevi began working at the age of four and, in a career spanning five decades, acted in 300 films.

Promoted
Listen to the latest songs, only on JioSaavn.com
The gorgeous actor, often described as India's one and only female superstar and the queen of the 1990s, was best known for her roles in "Sadma", "Lamhe" "Mr India", "Chandni" and "Himmatwala". A versatile actor known for her impeccable comic timing, she reigned over not just Bollywood, but also the Tamil, Telugu and Kannada film industry.

After a 15-year break following her marriage to Boney Kapoor, a much leaner Sridevi made a smashing comeback with the 2012 film "English Vinglish". She followed it up with the thriller "Mom".
Sridevi died before she could see her older daughter Jhanvi's debut in films this year.