Sridevi, who started her career with Tamil, says that her daughter Jhanvi can also star in Tamil cinema if a good script comes her way 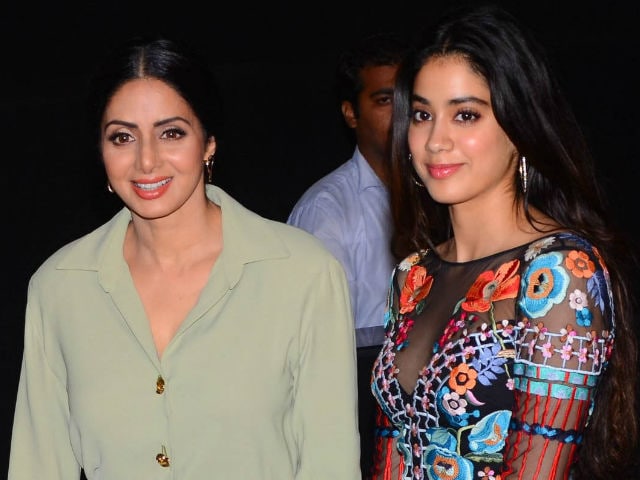 Sridevi and Jhanvi Kapoor in Mumbai

New Delhi: Actress Sridevi says that her elder daughter Jhanvi, whose Bollywood debut is an on-and-off trending subject, is also open to work in Tamil films if a good story comes her way. Sridevi, who will soon be seen in MOM, told news agency IANS: "I don't think language will be a barrier. If we come across a good script and if we feel it will be good for her, then why not?" Sridevi started her career with Tamil films when she was all of 13. Moondram Pirai (released as Sadma in Hindi), Manidharil Ithanai Nirangala! and Puli are among Sridevi's popular Tamil films. Sridevi added that it is "too soon" to talk about Jhanvi's debut.

Jhanvi Kapoor's career will be launched by Karan Johar. Initial reports suggested that Jhanvi will debut in the remake of Sairat but the latest Bollywood intel says that Jhanvi will be seen in Student Of The Year 2 co-starring Tiger Shroff. Talking about Jhanvi's debut, Sridvi told NDTV that she's 'very tensed.' She said: "This industry has given me so much but it's tough. She has to work hard."

Recently, Sridevi was criticised for saying she wanted marriage over an acting career for daughter Jhanvi but she explained that she had been 'misunderstood.' On Thursday, Sridevi tweeted that she's 'concerned' that her comment makes it appear as though she thinks 'girls should just get married.' Sridevi explained that she only meant that she's prefer if her daughters did not "lead the kind of hectic life that comes with this business and instead have a relatively stable and relaxed life."

Promoted
Listen to the latest songs, only on JioSaavn.com
Sridevi is married to producer Boney Kapoor and together they have two daughters - Jhanvi, 19, and Khushi, 17. Arjun Kapoor and Anshula (born to Boney Kapoor and Mona Shourie) are Jhanvi and Khushi's half-siblings.