Regarding concerns on Colombo's ties with China, the Sri Lankan President said to Foreign Secretary Harsh Shringla that he would not allow Sri Lanka to be used for activity that could threaten India's security. 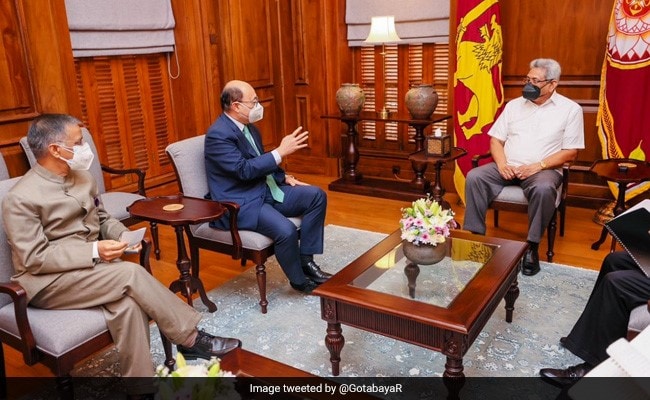 Sri Lankan President Gotabaya Rajapaksa on Tuesday assured India that his country would not be allowed to be used for any activity that could pose a threat to India's security, as he explained Colombo's ties with China in a "comprehensive manner" to Foreign Secretary Harsh Vardhan Shringla and exchanged views with him on a wide range of issues, including post-pandemic economy revival.

Mr Shringla called on President Rajapaksa before he wrapped up his four-day visit to the island nation to review the bilateral ties. The meeting took place a day after the president returned from the US, after attending the annual UN General Assembly.

"Sri Lanka would not be allowed to be used for any activity that could pose a threat to India's security," President Rajpaksa conveyed it to Mr Shringla during the meeting, a presidential release said.

President Rajapaksa explained the nature of Sri Lanka's relationship with China "in a comprehensive manner and informed the Indian Foreign Secretary not to have any doubts about it," it said.

China has been ramping up its presence in Sri Lanka, investing billions of dollars in various infrastructure projects, including ports.

Beijing is also providing financial assistance to Sri Lanka as its economy struggles under the strain of the COVID-19 pandemic.

A strategic port that was built by Chinese companies at Hambantota - which Sri Lanka was not able to repay and therefore handed over to Beijing in 2017 on a 99-year lease - has enhanced Beijing's presence on the island. India is also concerned over China's plans to build a brand new city with Chinese money off the coast of Colombo on reclaimed land.

President Rajapaksa told Mr Shringla that Indian investors are invited to invest in the island and Sri Lanka was keen to resolve the situation regarding the Trincomalee oil tanks in a manner that is beneficial to both countries.

The World War II-era oil storage facility in the strategically advantaged port district of Trincomalee has been a key bilateral economic partnership link for decades.

Since 2003, the Sri Lankan subsidiary of India's oil major Indian Oil Corporation (IOC), the Lanka IOC, has had the leasing rights to 99 tanks at the facility for a period of 35 years, for an annual payment of USD 100,000.

Mr Shringla's visit to the site on Sunday assumes significance as oil sector trade unions in Sri Lanka have demanded that tanks be brought under the control of the state fuel entity Ceylon Petroleum Corporation (CPC).

President Rajapaksa tweeted that he had a fruitful discussion with Foreign Secretary Harsh Vardhan Shringla.

"Both agreed on the need for strengthening the lasting bond b/w 2 countries. I invited Indian investors to come to #SriLanka, while we discussed tourism, power generation & post-pandemic economy revival," he said.

Had a fruitful discussion w/ Indian Foreign sec. @harshvshringla. Both agreed on the need for strengthening the lasting bond b/w 2 countries. I invited Indian investors to come to #SriLanka, while we discussed tourism, power generation & post-pandemic economy revival. pic.twitter.com/GPHCDreHP9

The Sri Lankan President elaborated on the need to re-establish the friendship and relations between India and Sri Lanka that existed in the 1960s and 70s.

President Rajapaksa said that he is expecting to obtain India's support in advancing the 1971 proposal to declare the Indian Ocean a peace zone.

The long standing problems faced by the fishermen of the two countries could be resolved by identifying immediate solutions to the existing problems and providing the benefits rightfully owed by the fishing community, the release said.

On India's concerns over the 13th amendment, President Rajapaksa pointed out the urgent need to understand the weaknesses as well as the strengths of the 13th Amendment.

Mr Shringla, in his meetings with the Tamil minority parties, had stressed the Indian commitment to the 13th Amendment as a means to bring about reconciliation in Sri Lanka.

India has been consistently calling upon Sri Lanka to fulfill its commitments to protect the interests of the Tamil community and preserve the island nation's character as a multi-ethnic and multi-religious society.

The 13th Amendment provides for devolution of power to the Tamil community. India has been pressing Sri Lanka to implement the 13th amendment which was brought in after the Indo-Sri Lankan agreement of 1987.

A release from the Indian High Commission said the Foreign Secretary underscored the importance India attaches to expeditiously taking forward mutually beneficial projects, including proposals to enhance air and sea connectivity between India and Sri Lanka.

Earlier, the High Commission of India (HCI), giving details of the meeting, said in a tweet, "they reaffirmed the strong ties of friendship & cooperation between India & Sri Lanka and discussed ways to further advance this comprehensive partnership at all levels."

In all his engagements, Mr Shringla underscored India's willingness to pursue economic and commercial ties between the two countries and post pandemic economic recovery by taking forward joint projects of mutual benefit was emphasised, officials said.

"His visit will give further impetus and momentum to India-Sri Lanka ties," it said in a tweet.

He also held delegation-level meetings with his Lankan counterpart Admiral (Retd) Prof. Jayanath Colombage on Monday. during which they reviewed bilateral cooperation.

The Foreign Secretary also interacted with the Indian High Commission officers at the Mission premises on Tuesday.

"Team HCI is truly grateful for his words of encouragement and support," the Indian High Commission said in another tweet.