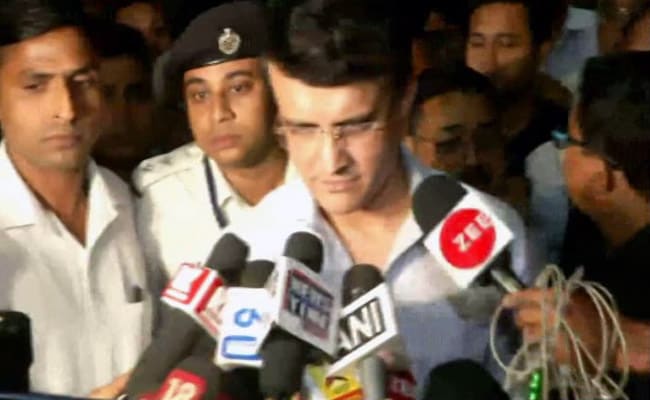 Former Team India captain Sourav Ganguly, who will take over as the country's top cricketing body soon, today complimented economist Abhijit Banerjee over his achievement of winning the Nobel Prize for Economics for his work in the field of poverty alleviation.

"His is the bigger achievement, and I congratulate him. I have never met him, but I was reading about his achievements in the flight, and I can see that he is a special person. It's a terrific achievement," the future Board of Control for Cricket in India (BCCI) president said upon his arrival at the Kolkata airport, adding that he hopes to meet the Nobel laureate soon.

Sourav Ganguly went on to say that one of his main tasks after taking over a "young" BCCI would be to identify world-class cricketers and build the cricket team from the bottom up. "I will work to the best of what I know. I have got a very young team with Jay Shah, Arun Dhumal and Jayesh George," he told mediapersons. "Jay and I are the most experienced administrators of the lot, and I am 46 while he is just 31."

Jay is Union Home Minister Amit Shah's son, while Arun Dhumal is the brother of Minister of State for Finance and Corporate Affairs Anurag Thakur. The two will occupy the posts of BCCI secretary and treasurer respectively.

Although the BCCI elections are scheduled to be held on October 23, Sourav Ganguly is set to benefit from a walkover in the absence of a competitor. "What makes me happy is that I get an opportunity when it's a tough situation. It gives me tremendous amount of confidence and makes me feel that they have faith in me and my abilities," he said.

The former cricketer went on to specify how he aims to transform the Indian team under his leadership. "My biggest priority, as I have been harping on for over three years, is the need to find first-class cricketers. We will change their lives, and that's very important. They are the base of Indian cricket, but we only look at the top. We have to look at the bottom and change it," he said.