Sonia Gandhi said Arun Jaitley was a person who attracted friends and admirers across the political spectrum and every walk of life. 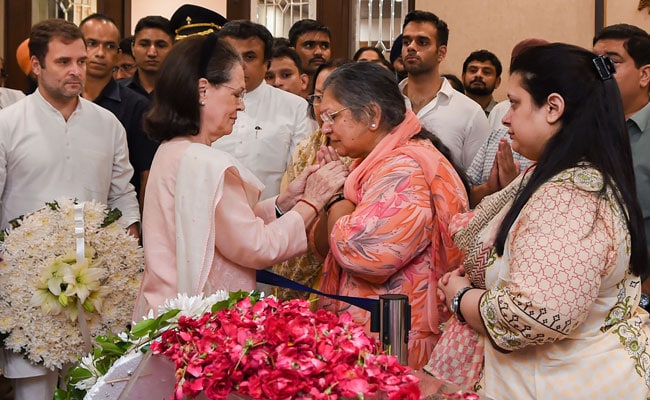 Congress interim President Sonia Gandhi on Saturday condoled the death of former Finance Minister Arun Jaitley and wrote a letter to his wife, saying that he attracted friends across the political spectrum and fought the cruel illness with indomitable spirit till the end. Earlier on Saturday, Sonia Gandhi had paid her last respects to the veteran BJP leader at his home, hugging Sangeeta Jaitley when the two met.

In a letter to Sangeeta Jaitley, Sonia Gandhi said, "I am very sad to learn of the passing away of your beloved husband."

She said Arun Jaitley was a person who attracted friends and admirers across the political spectrum and every walk of life.

"His sharp intellect and ability and his communication skills were evident in every cabinet position he held, in his role as Leader of the Opposition in the Rajya Sabha, and as a senior Advocate at the Supreme Court," the United Progressive Alliance chairperson said.

She said, "Arun Jaitley fought his cruel illness with great courage till the end. His passing is all the more tragic because he was so young, when he had so much more to contribute to national life."

"Words are little consolation at this time of grief, but I wanted you, your son and your daughter to know that I share your pain. May Arunji find eternal peace," she added.

Arun Jaitley, 66, died Saturday afternoon at AIIMS where he had been admitted on August 9.

Her son Rahul Gandhi said in a tweet, "I am sorry to hear about Mr Arun Jaitley's passing. My condolences to his family and friends. May he rest in peace."

In his condolence message to Mr Jaitley's wife, former Prime Minister Manmohan Singh said, "In his death our country has lost a great leader who always worked for the betterment of society."