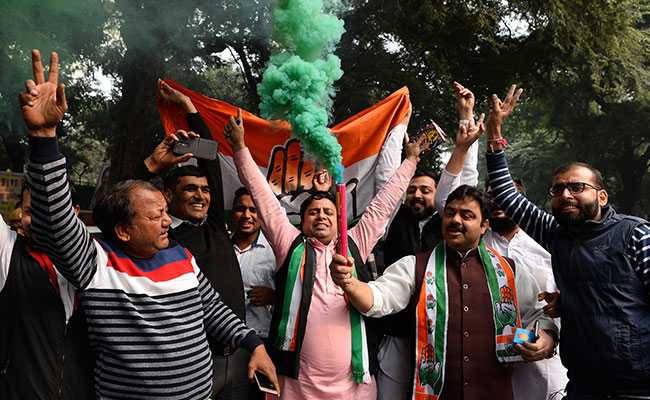 Congress workers burst crackers, danced to the dhol and played with gulal as they celebrated the party's good show in Rajasthan and Chhattisgarh. Carrying the Congress flag, a large number of workers gathered at the party headquarters in Delhi and lauded Rahul Gandhi's leadership in steering the Congress towards victory.

They distributed sweets and put up big banners on walls. Congress workers chanted 'Rahul Gandhi Zindabad'. Interestingly, a Congress worker also put up a banner that said, "Next prime minister of India".

Senior Congress leaders, including Navjot Singh Sidhu and Priyanka Chaturvedi, joined the party workers at the 24, Akbar Road office and expressed joy as the trends of poll results showed Congress taking the lead in Madhya Pradesh, Chhattisgarh and Rajasthan

"It was a united effort in preparing and campaigning for polls. The leader at the top was inspiring everybody. Rahul ji has exhibited great character in a time of crisis, like a captain guiding a ship in choppy waters," Mr Sidhu told news agency PTI.

The lawns at Congress headquarters were filled with party workers carrying Congress flags and hailing Rahul Gandhi him as a "great leader". It was after a long gap that Congress workers were seen celebrating the party's victory.

Jeetpal Yadav, 24, a law student who had come from Laxmi Nagar, said, "We are very happy, and we should be winning in three states."

"But we should not rejoice too much as a lot of hard work would be needed for 2019 elections. Win in a few states would not signal a victory in Lok Sabha elections," he said.