Sonam Kapoor shared her street style while in Paris; she combined pieces from Pringle of Scotland and Bhane 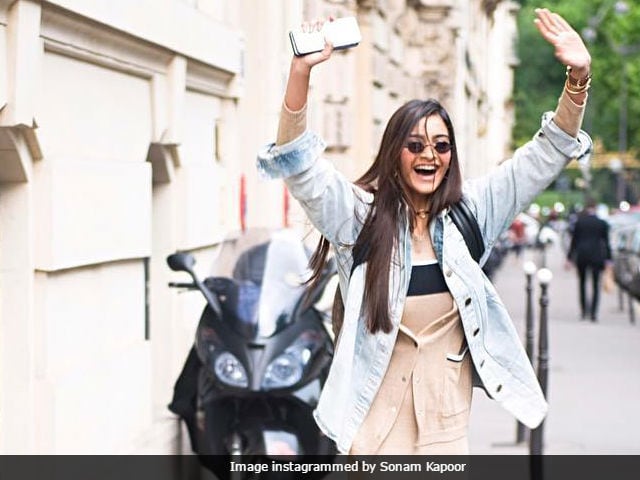 New Delhi: Sonam Kapoor street style is Paris is to die for. No, seriously. The 32-year-old actress instagrammed moments from her Paris travelogue. Earlier this week, Sonam walked the ramp at the Paris Couture Week for designers Ralph & Russo - she was there showstopper. In her latest picture series, Sonam shared her street style while in Paris. It's fashionable as you would expect. Sonam combined pieces from Pringle of Scotland and Bhane (owned by her rumoured boyfriend Anand Ahuja) and accessorised with Roberi & Fraud shades and Nike sneakers. Sonam shared the mood of the pictures with quotes from former POTUS Barack Obama, Friedrich Nietzsche and Hippocrates.

All truly great thoughts are conceived by walking. Friedrich Nietzsche @thehouseofpixels @amaker7 @pringlescotland @roberiandfraud @bhanelove @nike (for more pictures in this series go to my app)

If you're walking down the right path and you're willing to keep walking, eventually you'll make progress. Barack Obama @thehouseofpixels @amaker7 @pringlescotland @roberiandfraud @bhanelove @nike (for more pictures in this series go to my app! )

Before Paris, Sonam Kapoor was vacationing in London with Anand Ahuja, who posted pictures after they bumped into Juhi Chawla on the streets.

Before London, Sonam took a trip to Sri Lanka with her sister Rhea Kapoor. Sonam and Rhea, co-owners of Rheson, showcased the chic travel collection from their brand in the pictures.

Meanwhile, Sonam Kapoor, who was last seen in Neerja has Padman and Sanjay Dutt's biopic lined up for release. Sonam won a National Award (Special Mention) for her portrayal of Pan Am purser Neerja Bhanot, who died saving passengers on board a hijacked flight.