"Ring Of Fire": Last Solar Eclipse Of Decade Visible From Parts Of India

Solar Eclipse: In India, people from Karnataka, Kerala and Tamil Nadu were able to see the annular solar eclipse, while the rest of the country could see a partial solar eclipse.

The annular solar eclipse, the last one for the decade, began at around 8 am this morning and lasted till about 11.15 am. Often referred to as the "ring of fire"- the solar eclipse or "Surya grahan" was initially visible as a partial eclipse and was viewed first from Riyadh in Saudi Arabia.

In India, the rare celestial spectacle was first viewed from Chervathur in Kerala. People from Karnataka and Tamil Nadu were also able to see the annular solar eclipse, while the rest of the country could see a partial solar eclipse. 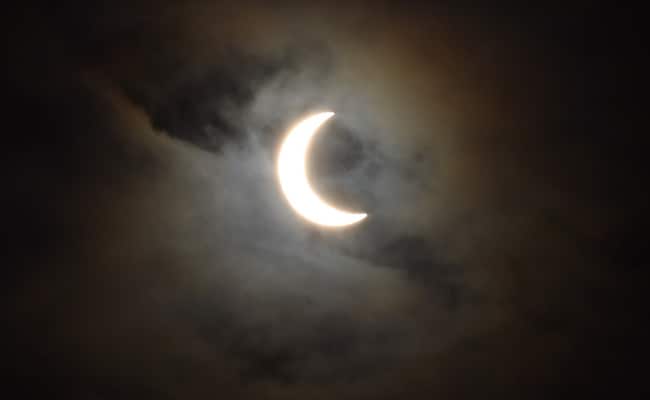 There are three types of solar eclipse - total, partial and annular.

A solar eclipse occurs when the Moon passes between Earth and the Sun, totally or partly obscuring the Sun for a viewer on Earth. An annular solar eclipse takes place when the moon's apparent diameter is smaller than that of the Sun's, blocking most of the Sun's light. This causes the Sun to look like a 'ring of fire'.

Most years have two solar eclipses and in rare cases, there can be up to seven eclipses in a year. Solar Eclipse at seen from Dubai

Partial phases of the solar eclipse was visible from various parts of the country in varying magnitude, depending on its geographical position.

For the duration of the eclipse, many temples across the country like Kerala's Sabarimala temple, Tirumala Tirupati Balaji temple in Andhra Pradesh and Meenakshi temple in Madurai was shut and will reopen after purification rituals, going by tradition.

It is said several cultures and faiths believe that during an eclipse, the sun emits radiations that are negative and temples are kept shut so as to prevent these radiations from affecting the deity. 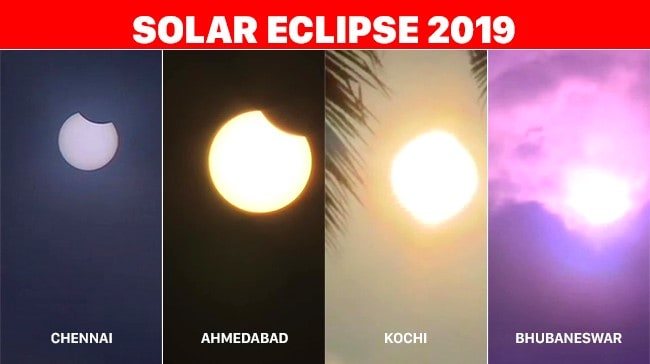 Ahead of the solar eclipse, astronomers issued a set of dos and don'ts for safe viewing. Sky watchers are advised to use safe viewing equipment and proper techniques to view the celestial event as the infrared and ultraviolet rays of the Sun can cause severe retinal damage, a senior astronomer was quoted by Press Trust of India as saying.

"One should not look at the Sun directly for even a little period without proper protection. Even when 99 per cent of the surface of the Sun is covered by the moon during partial eclipse, the remaining light is still intense enough to damage the eye," Debiprosad Duari, the director of MP Birla Planetarium told PTI.

"Proper solar filters with certified appropriate optical density against radiation which are safe to the eyes should be used in front optical devices and the naked eye," he said.

According to experts, the best way to view the solar eclipse is a pinhole camera or a telescopic projection used on a suitable surface.

There are several YouTube channels that live streamed various phases of the solar eclipse. Some of them are - Canary Islands-based Slooh Observatory, Sri Lanka's Tharulowa Digital, CosmoSapiens among others.