Surya Grahan 2019, Solar Eclipse 2019: Scientists say that the only safe way to look directly at the uneclipsed or partially- eclipsed sun is through special-purpose solar filters, such as "eclipse glasses" or hand-held solar viewers. 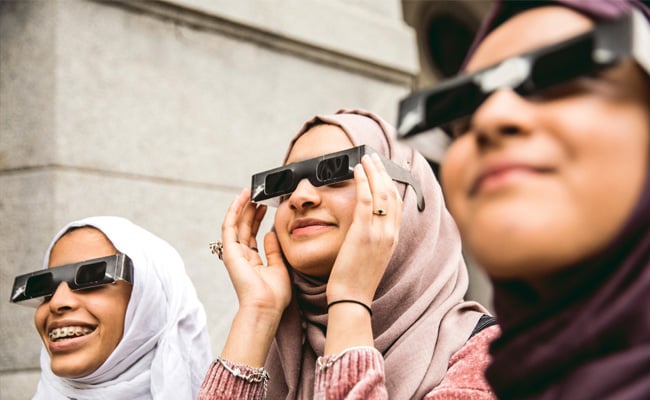 Surya Grahan: Use eye protection during Solar Eclipse like a special eclipse glasses.

1.    NASA advises that it is dangerous to see solar eclipses through naked eyes and it can damage one's eyes. So don't look at the Sun directly. Looking at the Sun, even for a few seconds, can lead to permanent damage to the retina of the eye, it says.
2.    Don't look at the Sun even while using any kind of optical aid like binoculars, a telescope, or an optical camera viewfinder as it can be extremely hazardous and can cause irreversible eye damage within a fraction of a second.
3.    Don't try to use sunglasses, smoked glass, or some other home-made substitute. They're not safe to use during partial solar eclipse or surya grahan.
4.    Use eye protection during surya grahan like a special eclipse glasses should be used to witness the solar eclipse. Always use special-purpose solar filters, such as "eclipse glasses" or hand-held solar viewers to watch the solar eclipse, say scientists.
5.    Scientists say that the only safe way to look directly at the uneclipsed or partially eclipsed sun is through special-purpose solar filters, such as "eclipse glasses" or hand-held solar viewers. NASA suggests that when using or buying the eclipse glasses or hand-held solar viewers, they should be verified to be compliant with the ISO 12312-2 international safety standard for such products.
6.    Always inspect solar filter before use. If scratched or damaged, discard it. Read and follow any instructions printed on or packaged with the filter, suggests NASA.
7.    Ayurveda advises that people avoid eating during surya grahan, but there are exceptions for old, ailing and pregnant patients who can eat light, sattvik food that can be easily digested. Modern sciences, however, do not support any dietary restrictions.
8.    In India, some people believed that solar eclipses are inauspicious as the Sun is not clearly seen and it could lead to an increase in bacteria and germs. People thus stopped cooking, eating or drinking at that time or go outdoors. People also prayed, took baths to purify themselves and the "evil" effects of the eclipse. Another common superstition related to surya grahan is that eclipses can be dangerous for pregnant women and their unborn babies. Expectant mothers are told to not step out or undertake any activity at home.
9.    In India, the solar eclipse will be visible in most southern states, including Karnataka, Kerala, and Tamil Nadu.
10.    The best place to see this year's surya grahan or solar eclipse is Cheruvathur, a town in Kasaragod district, will be among the few places of the world where the eclipse will be most clearly seen.